What we write as source code is a high-level language which is a combination of zero’s and one’s. After writing a C++ program or any software program, we need some translator or interpreter to compile the program and then run the executable generated by the compiler.

Today, we will discuss the C++ compilation process along with some of the top-notch C++ compilers that are available in the market.

A C++ program consists of a header file (.h) and a source file (.cpp). Apart from this, external libraries or files are linked to C++ program using the <include> directive.

The process to compile a C++ program has 3 steps below:

Those three steps of compilation are done with a click of a button in the case of IDEs.

Now we move to some of the top compilers for C++.

MinGW stands for “Minimalist GNU for Windows”. It’s an open-source and free tool with no third party requirement and work well for native Windows applications. It has GCC compilers to include C, C++, Fortran language compilers.

This compiler has high level of portability available in GCC by ANSI Compliance, making it a favorite by most of the users. It’s also fast and simple. 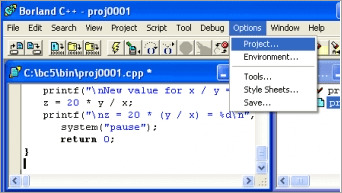 Borland C++ is the oldest and cheap compiler developed for Windows and MS-DOS. It’s also a C++ IDE and is widely used in the 90s. Borland C++ is a successor of Turbo C++ and comes with a better debugger. You can use their simple editing features to make code easier and simple.

Clang is a C/C++/Objective-C compiler which is designed based on LLVM. It’s preferred for the fast compiles delivery and better analysis of the code. Clang is used to build great source level tools, has useful error and warning messages. It can also find bugs in your code automatically thanks to the Clang Static Analyzer tool.

From its name Intel C++ compiler, or ICC, we can see that it’s developed by Intel corporation. It’s used for computationally intensive apps and comes with a commercial license.

Its advantages are faster and effective processing, identical performance and no scalar instructions, flexible and easy to switch between compilers.

Visual C++ is the compiler which Microsoft bundles with Visual Studio for C and C++. This current version will support C++17 core language and library features. The new version of Visual Studio 2022, which is still a preview now, will have a Visual C++ compiler that support C++20 features fully.

Visual C++ features are prominent. It has the fastest executables, it supports developing apps based on Windows and Linux. It reduces users burden on writing code using OLE development. All of those features help Visual C++ become a favorite for professional C++ developers.

Continue with the series of C++ articles, we hope that it gives you an overview of top C++ compilers and you can select the best one for yourself.

At iRender, we provide multiple GPUs for renting with state-of-the-art RTX3090. Our remote machines are Optimized for Scientific Computing, Machine Learning, Deep Learning.

We support not only C++, but also other programming languages such as: Python, Java, R, and many IDEs and libraries like above.

This is our packages tailored for AI/ Deep Learning:

You can also read our article about how RTX3090 be the best choice for AI/ Deep Learning (Is RTX3090 the best GPU for Deep Learning).

You can register an account today to experience our service. Or contact us via WhatsApp: (+84) 916806116 for advice and support.

AI – Artificial Intelligence has been increasingly developing in our modern life, with many applications help change the world. However,…