First announced in 2014, according to NVIDIA, NVLink is the world’s first high-speed GPU interconnect offering a significantly faster alternative for multi-GPU systems than traditional PCIe-based solutions. Two NVIDIA graphics cards connected with each other with NVLink will enable scaling of memory and performance to meet the demands of your largest visual computing workloads.

However, not all cards from NVIDIA support NVLink, but only those series of cards below.

Each connected graphics card has access to other’s memory. So for example, if you use NVLink to connect two RTX 3090 with vRAM 24GB, it means that you have access to a total of 48GB vRAM. (or with RTX 2080Ti, when connected will be 22GB vRAM)

The bandwidth when those cards connected using NVLink bridges will be from 25GB/s to 35GB/s on the GeForce RTX.

NVLink is targeted at the workstation graphics cards, which will help you improve the performance if you are using multi-GPU for deep learning and machine learning applications, high-end video rendering, etc.

The most important thing when you render are the highest possible number of CUDA Cores and VRAM.

The time it takes to render an average Frame on your GPU is almost linearly inverse proportional to the amount of CUDA Cores your GPU has.

The GPU though can only make use of its huge CUDA Core performance if the 3D Scene Data fits into its VRAM (Video Memory on the GPU).

This means, if you know you have very complex scenes with millions of polygons, sub-poly displacement, or things like large textures, your need for VRAM will be much higher than if your scenes are fairly simple with only a few objects.

Render test on RTX3090 with NVLink for Keyshot

AI, machine learning, and deep learning tasks process a lot of data. These tasks can be very demanding on your hardware.

Our newly-launched GPU server 6 and 8 with NVLink available will help you to solve any problems of your 3D or AI/DL projects. 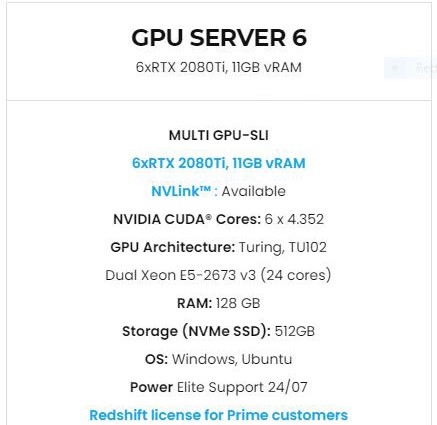 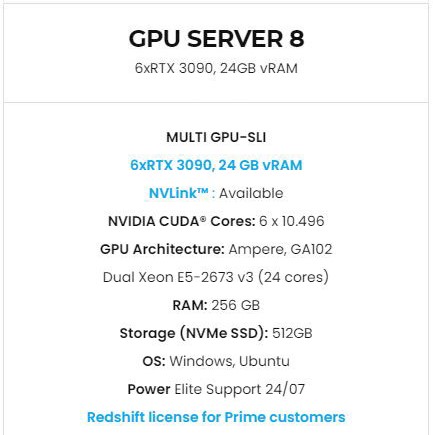 With the above advantages of NVLink that iRender has just added to our server 6 and 8, we believe that 3D and AI/DL users will have the most comfortable, quickest, and most effective working time.