Unlike OctaneRender Standalone, which can generate a variety of primitives, OctaneRender Plugin for Cinema 4D does not directly create geometric objects. However, the one exception to this is the Octane Vectron object. In this article, iRender will show you how to create a vectron object and apply the vectron primitive.

Vectron in OctaneRender Plugin is a new procedural “uber” primitive which provides infinite procedural scenes, volumes and geometry without using meshes or volumes. Vectron objects have zero-memory footprint and spend zero cost to modify, so they are more efficient than meshes or volumes genterated on CPU host app. The procedural scene generation is live, realtime and 100% on the GPU without any GPU VRAM used. Vectron works with OctaneRender’s built-in OSL (Open Shading Language) support and OSL texture shaders.

You can access many available presets in the Vectron object by going to Live => Objects => Vectron. To create Vectron objects, you can edit a given OSL script in the edit field of the script group. Another way is that you load an external script (in that case, we can not see the code for the Vectron object).

Next, you select the Vectron object in the Cinema 4D Object Manager, and then choose the Code Group tab in the Attribute manager: 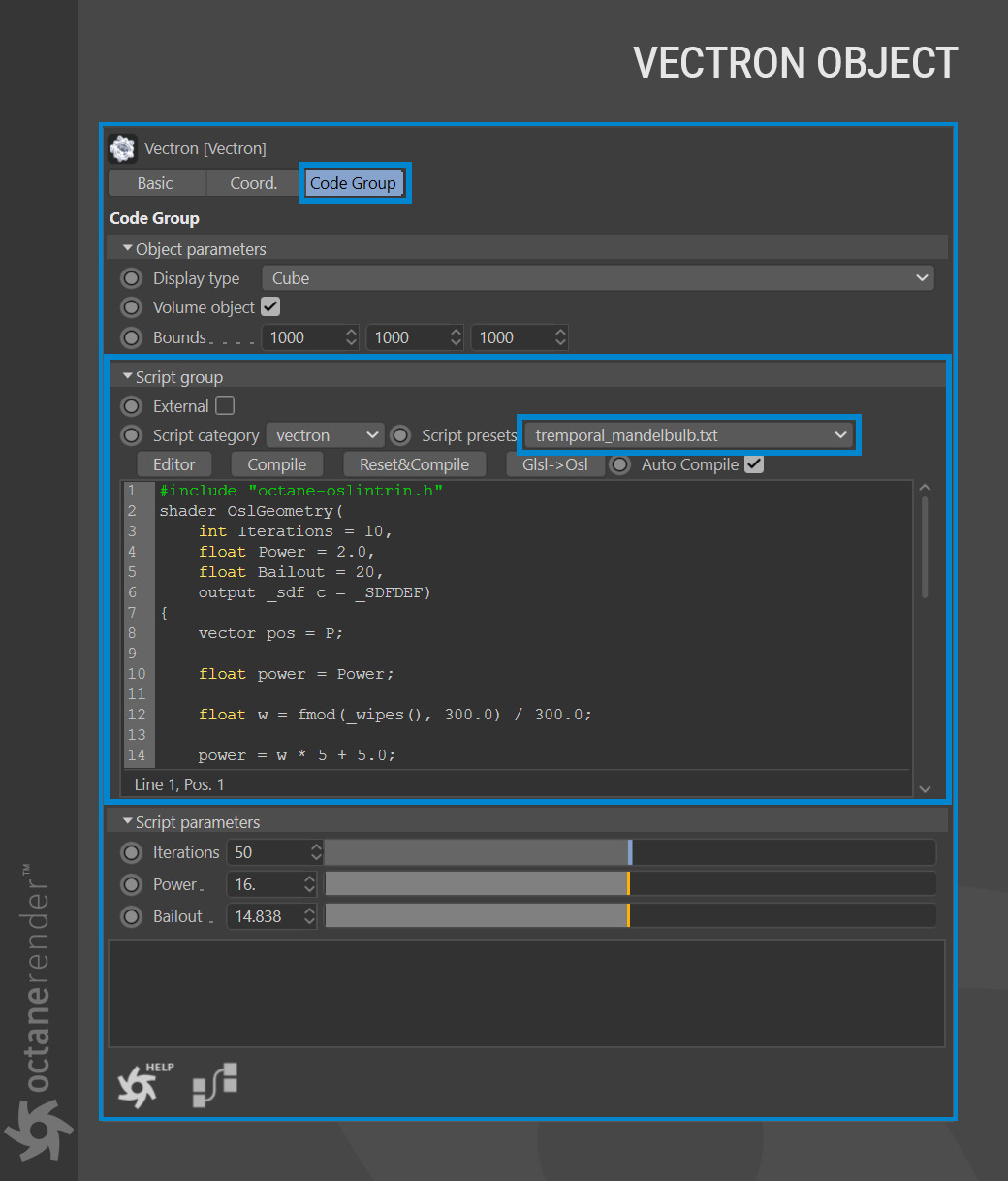 Because there are no polygons in a Vectron object to draw in the Cinema 4D viewport, the actual drawing of the Vectron equation will only take place in Live Viewer or when rendering. Instead, a bounding box and a (usually tiny) sphere in the center of the bounds are generated, with the size of the bounding box being controlled by the Object parameters group on the Code tab. Any portion of a Vectron object that is outside of the bounds will be clipped and not drawn.

Vectron scripts typically generate fast, thus the Live Viewer is ideal for working with them because feedback is practically instantaneous. In some circumstances, a specific script might not display results right away. In these situations, consider modifying the Script Parameter values. The sliders in the Script Parameters group could be difficult to use because the bounds are too large. In such situation, limit a slider’s range by modifying the value of float slidermax in the script to 10, then make necessary adjustments.

An OSL script for a fresh Vectron object has the following lines of code: 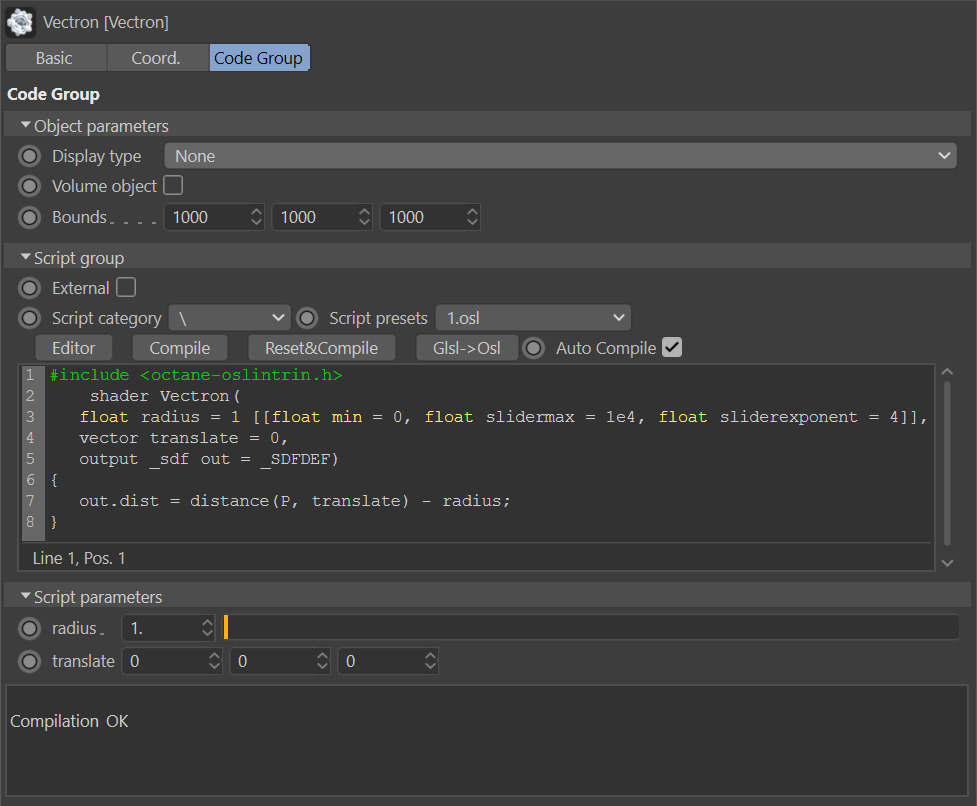 A basic sphere is created using this script. With a little more code, as seen in the figure below, you obtain the following outcome: 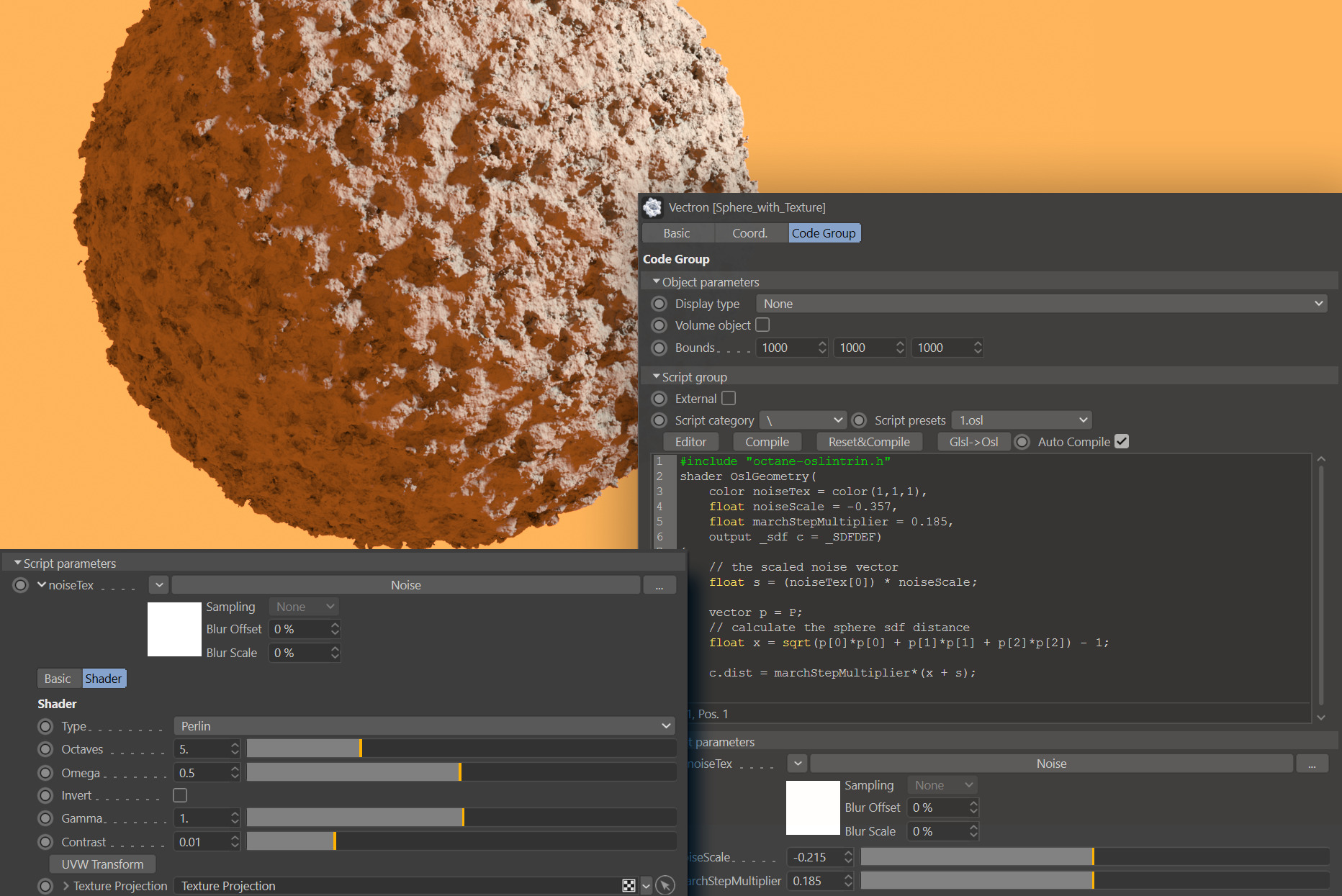 OctaneRender can render defined SDF surfaces using OSL shaders without the need to convert them to a Mesh first. With OSL, you may assemble networks of set operations like unions, subtractions, intersections, and their smooth variations without needing to mesh them first. You can also update the surfaces with input variables without waiting for any processing. 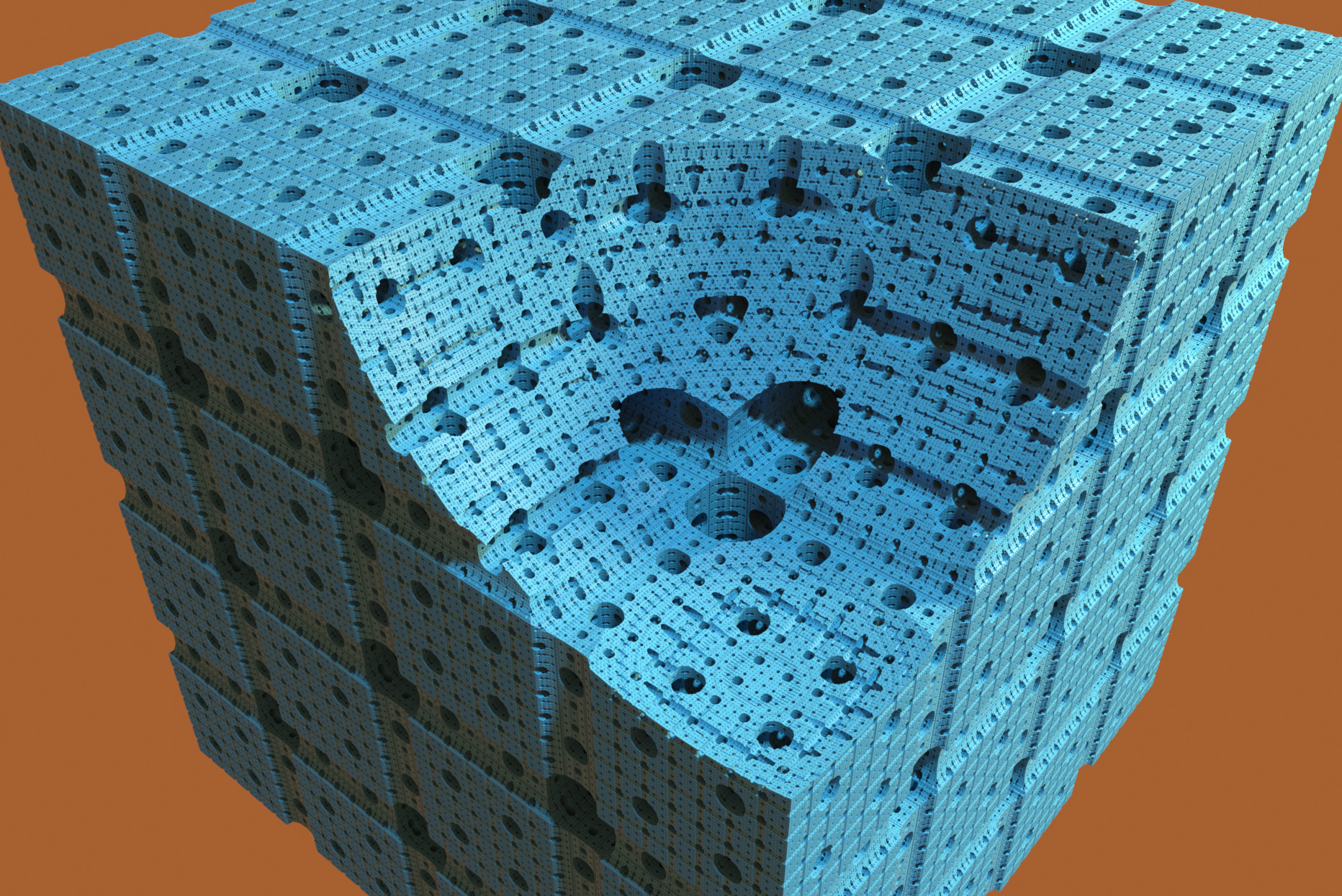 An illustration of a sphere being removed from a Menger cube is shown above. The c4doctane plugin can do this subtraction since it happens at the formula level. Only Octane Standalone provides object to object booleans.

There are several preset scripts included with the Vectron object:

If you’re a fan of Octane who wants to learn and use the latest features, but your computer configuration is still limited, don’t worry; iRender will provide you with a solution that will completely address your problem. In other words, our company offers a choice of server, allowing you to pick the best server package for Octane.

As a result, the powerful machines make rendering enjoyable and quick. In addition, a unique feature is that you will connect to the iRender server and utilize it as your own computer, with total control over setup and capacity. Above all, our server supports any applications; therefore, you may install the program you need only once, and everything will be kept for future use. If you’re concerned about security, be assured that the safety and security of your data is our first priority. No one, including iRender, will have access to any of your data. The privacy policy of iRender may be found here. To understand more about our server’s performance with Octane, you can see the following video: 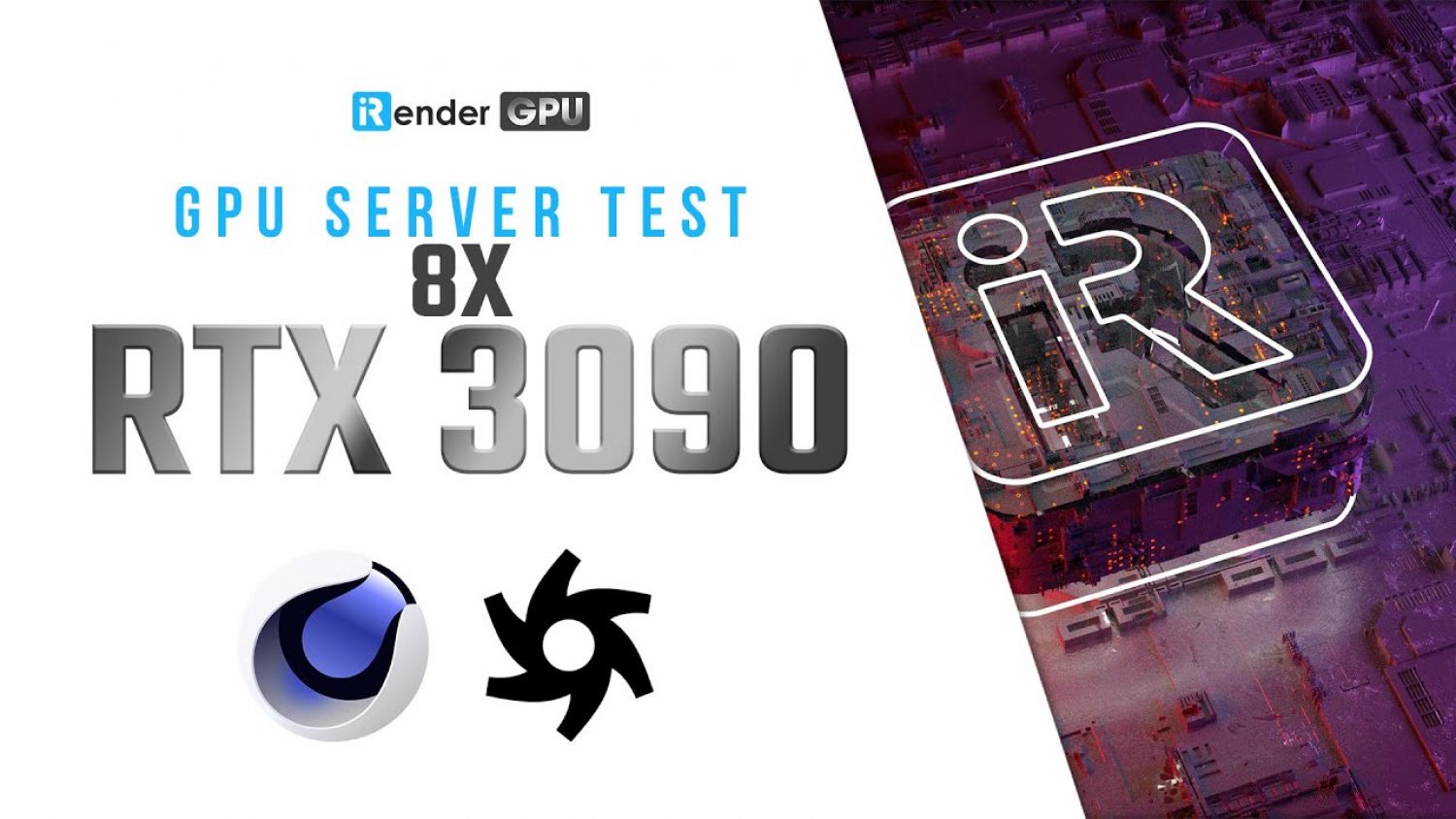 Besides, we are committed to providing you with a rendering experience unlike any other. iRender has appreciated in many global rankings (e.g: CGDirector, Lumion Official, Radarrender, InspirationTuts CAD, All3DP, VFXRendering). iRender, in particular, is running a fantastic deal for you: new clients will receive a 20% bonus on their first purchase within 24 hours of enrolling. To learn and enjoy more, please create an account here.