IT owes its existence as a professional discipline to companies seeking a competitive edge from information. Today, organizations are awash in data, but the technology to process and analyze it often struggles to keep up with the deluge of every machine, application and sensor emitting an endless stream of telemetry. An explosion in unstructured data has proved to be particularly challenging for traditional information systems based on structured databases, which has sparked the development of new algorithms based on machine learning and deep learning.

That’s because the nexus of geometrically expanding unstructured data sets, a surge in machine learning (ML) and deep learning (DL) research, and exponentially more powerful hardware designed to parallelize and accelerate ML and DL workloads have fueled an explosion of interest in enterprise AI applications. IDC predicts AI will become widespread by 2024, used by three-quarters of all organizations, with 20% of workloads and 15% of enterprise infrastructure devoted to AI-based applications.

Enterprises will build many of these applications on the cloud. But the massive amount of data required to train and feed such algorithms, the prohibitive costs of moving data to — and storing it in — the cloud, and the need for real- or near-real-time results, means many enterprise AI systems will be deployed on private, dedicated systems.

In preparing for an AI-enhanced future, IT must grapple with many architectural and deployment choices. Chief among these is the design and specification of AI-accelerated hardware clusters. One promising option, due to their density, scalability and flexibility, is hyper-converged infrastructure (HCI) systems. While many elements of AI-optimized hardware are highly specialized, the overall design bears a strong resemblance to more ordinary hyper-converged hardware.

Most AI systems run on Linux VMs or as Docker containers. Indeed, most popular AI development frameworks and many sample applications are available as prepackaged container images from Nvidia and others. Popular applications include:

These have applications in a wide variety of industries, for example:

Some applications, such as anomaly detection for cybersecurity and automation systems for IT operations (AIOps), span industries, with AI-based features being incorporated in various management and monitoring products.

There will be a massive storage repository of historical data for AI and ML model training, and a high velocity of incoming data streams for model inference and predictive analytics. Data sets for machine learning and artificial intelligence can reach hundreds of terabytes to petabytes, and are typically unstructured formats like text, images, audio and video, but include semistructured content like web clickstreams and system logs. This makes these data sets suitable for object storage or NAS file systems.

Machine and deep learning algorithms feed on data. Data selection, collection and preprocessing, such as filtering, categorization and feature extraction, are the primary factors contributing to a model’s accuracy and predictive value. Therefore, data aggregation — consolidating data from multiple sources — and storage are significant elements of AI applications that influence hardware design.

The resources required for data storage and AI computation don’t typically scale in unison. So most system designs decouple the two, with local storage in an AI compute node designed to be large and fast enough to feed the algorithm.

Machine and deep learning algorithms require a massive number of matrix multiplication and accumulation floating-point operations. The algorithms can perform the matrix calculations in parallel, which makes ML and DL similar to the graphics calculations like pixel shading and ray tracing that are greatly accelerated by graphics processor units (GPUs).

However, unlike CGI graphics and imagery, ML and DL calculations often don’t require double-precision (64-bit) or even single-precision (32-bit) accuracy. This allows for a further boost in performance by reducing the number of floating-point bits used in the calculations. So, although early deep learning research used off-the-shelf GPU accelerator cards for nearly the past decade, the leading GPU manufacturer, Nvidia, has built a separate product line of data center GPUs tailored to scientific and AI workloads. 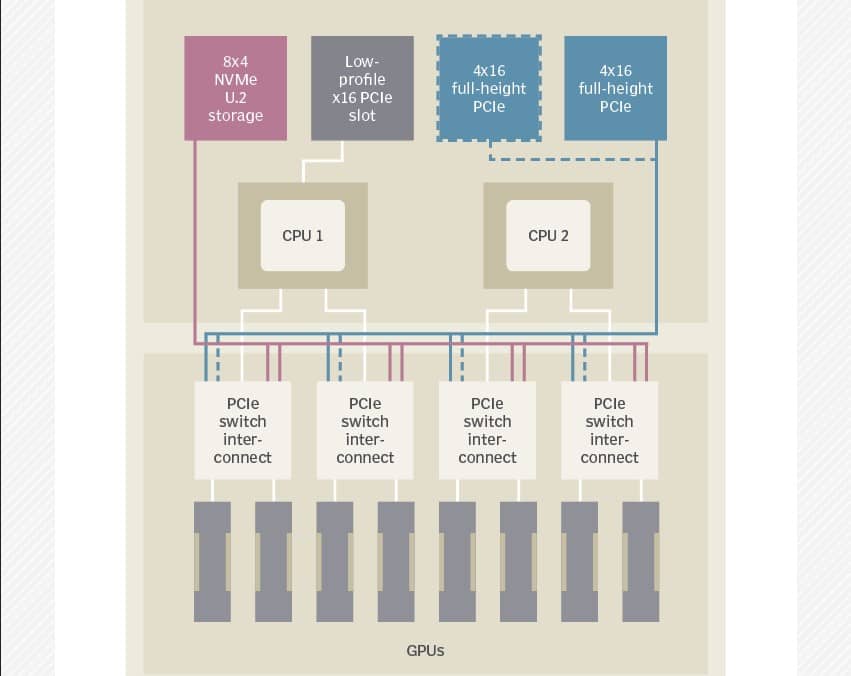 The system components most critical to AI performance are the following:

GPUs have been the workhorse for most AI workloads, and Nvidia has significantly improved their DL performance through features such as Tensor Cores, Multi-instance GPU (to run multiple processes in parallel and NVLink GPU interconnects). However, the increased need for speed and efficiency has spawned a host of new AI processors such as Google’s TPU, Intel Habana AI Processor, Tachyum Universal Processor, Wave AI SoC or field-programmable gate array (FPGA)-based solutions like Microsoft Brainwave, a deep learning platform for AI in the cloud.

Enterprises can use any hyper-converged infrastructure or high-density system for AI by choosing the right configuration and system components. And, one of the choices can be GPU cloud service as iRender. Let’s have a look at iRender’s GPU cloud server packages below

At iRender, we provide a fast, powerful and efficient solution for Deep Learning users with configuration packages from 1 to 6 GPUs RTX 3090 on both Windows and Ubuntu operating systems. In addition, we also have GPU configuration packages from 1 RTX 3090 and 6 x RTX 3090. With the 24/7 professional support service, the powerful, free, and convenient data storage and transferring tool – GPUhub Sync, along with an affordable cost, make your training process more efficient.