Nowadays, technology is going into our lives deeper than ever. We see them everywhere in social media, or apps on your phone, etc. These things make our experience better. And to keep up with the pace of user expectations, companies are trying to apply more and more technologies associated with artificial intelligence, machine learning, deep learning, and neural networks.

These terms are often used in our conversation, but what is the difference between them? In this article, let’s clarify it.

Perhaps the easiest way to think about artificial intelligence, machine learning, neural networks, and deep learning is to think of them like Russian nesting dolls. Each is essentially a component of the prior term.

Neural networks— or more specifically, artificial neural networks (ANNs)— mimic the human brain through a set of algorithms. At a basic level, a neural network has four main components: inputs, weights, a bias or threshold, and an output. Similar to linear regression, the algebraic formula would look something like below:

From there, let’s apply it to a more tangible example, like whether or not you should order a pizza for dinner. This will be our predicted outcome, or y-hat. Let’s assume that there are three main factors that will influence your decision:

For simplicity purposes, our inputs will have a binary value of 0 or 1. This technically defines it as a perceptron as neural networks primarily leverage sigmoid neurons, which represent values from negative infinity to positive infinity. This distinction is important since most real-world problems are nonlinear, so we need values which reduce how much influence any single input can have on the outcome. However, summarizing in this way will help you understand the underlying math at play here.

Now we need to assign some weights to determine importance. Larger weights means that a single input’s contribution to the output more significant compared to other inputs.

Finally, we’ll also assume a threshold value of 5, which would translate to a bias value of –5.

Since we established all the relevant values for our summation, we can now plug them into this formula.

Using the following activation function, we can now calculate the output (i.e., our decision to order pizza):

Y-hat (our predicted outcome) = Decide to order pizza or not

Since Y-hat is 2, the output from the activation function will be 1, meaning that we will order pizza.

If the output of any individual node is above the specified threshold value, that node is activated, and data is sent to the next layer of the network. Otherwise, no data is passed along to the next layer of the network. Now, imagine the above process being repeated multiple times for a single decision as neural networks tend to have multiple “hidden” layers as part of deep learning algorithms. Each hidden layer has its own activation function, potentially passing information from the previous layer into the next one. When all the outputs from the hidden layers are generated, then they are used as inputs to calculate the final output of the neural network. The above example is just the most basic example of a neural network; most real-world examples are nonlinear and far more complex.

The main difference between regression and a neural network is the impact of change on a single weight. In regression, you can change a weight without affecting the other inputs in a function. However, this case is different with neural networks. Since the output of one layer is passed into the next layer of the network, a single change can have a cascading effect on the other neurons in the network. 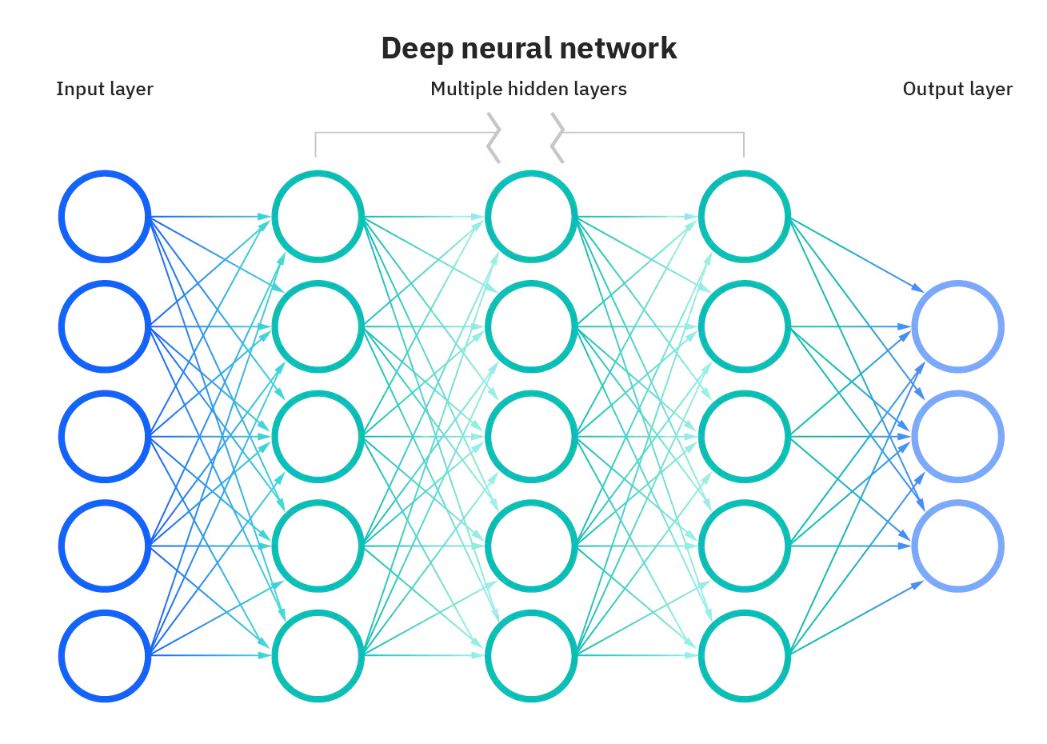 Most deep neural networks are feed-forward, meaning they flow in one direction only from input to output. However, you can also train your model in opposite direction from output to input, and it’s called backpropagation. Backpropagation allows us to calculate and attribute the error associated with each neuron, allowing us to adjust and fit the algorithm appropriately.

Deep learning can be understood as merely a subset of machine learning. The primary difference is how each algorithm learns and how much data each type of algorithm uses. Deep learning automates much of the feature extraction piece of the process, eliminating some of the manual human intervention required. It also enables the use of large data sets. This capability will be particularly interesting as we begin to explore the use of unstructured data more, particularly since 80-90% of an organization’s data is estimated to be unstructured.

“Deep” machine learning can leverage labeled datasets, also known as supervised learning, to inform its algorithm, but it doesn’t necessarily require a labeled dataset. It can ingest unstructured data in its raw form (e.g. text, images), and it can automatically determine the set of features which distinguish one item from one another.

By observing patterns in the data, a deep learning model can cluster inputs appropriately. We could group pictures of different items into their respective categories based on the similarities or differences identified in the images. With that said, a deep learning model would require more data points to improve its accuracy, whereas a machine learning model relies on less data given the underlying data structure. Deep learning is primarily leveraged for more complex use cases, like virtual assistants or fraud detection.

Finally, artificial intelligence (AI) is the broadest term used to classify machines that mimic human intelligence. It is used to predict, automate, and optimize tasks that humans have historically done, such as speech and facial recognition, decision making, and translation.

There are three main categories of AI:

ANI is considered “weak” AI, whereas the other two types are classified as “strong” AI. Weak AI is defined by its ability to complete a very specific task, like winning a chess game or identifying a specific individual in a series of photos. AGI and ASI is stronger form of AI, and they incorporate more human behaviours, such as the ability to interpret tone and emotion.

Strong AI is defined by its ability compared to humans. Artificial General Intelligence (AGI) would perform on par with another human while Artificial Super Intelligence (ASI)—also known as superintelligence—would surpass a human’s intelligence and ability. Neither forms of Strong AI exist yet, but ongoing research in this field continues.