However, 3D designers often encounter some problems related to computer performance during rendering. Lacking the Vram of the GPU card when rendering a big and complex scene is a case in point. This sometimes prevents them from taking full advantage of this powerful rendering engine. For today’s article, let’s find out some solutions to this “Out-of-VRAM” with iRender! 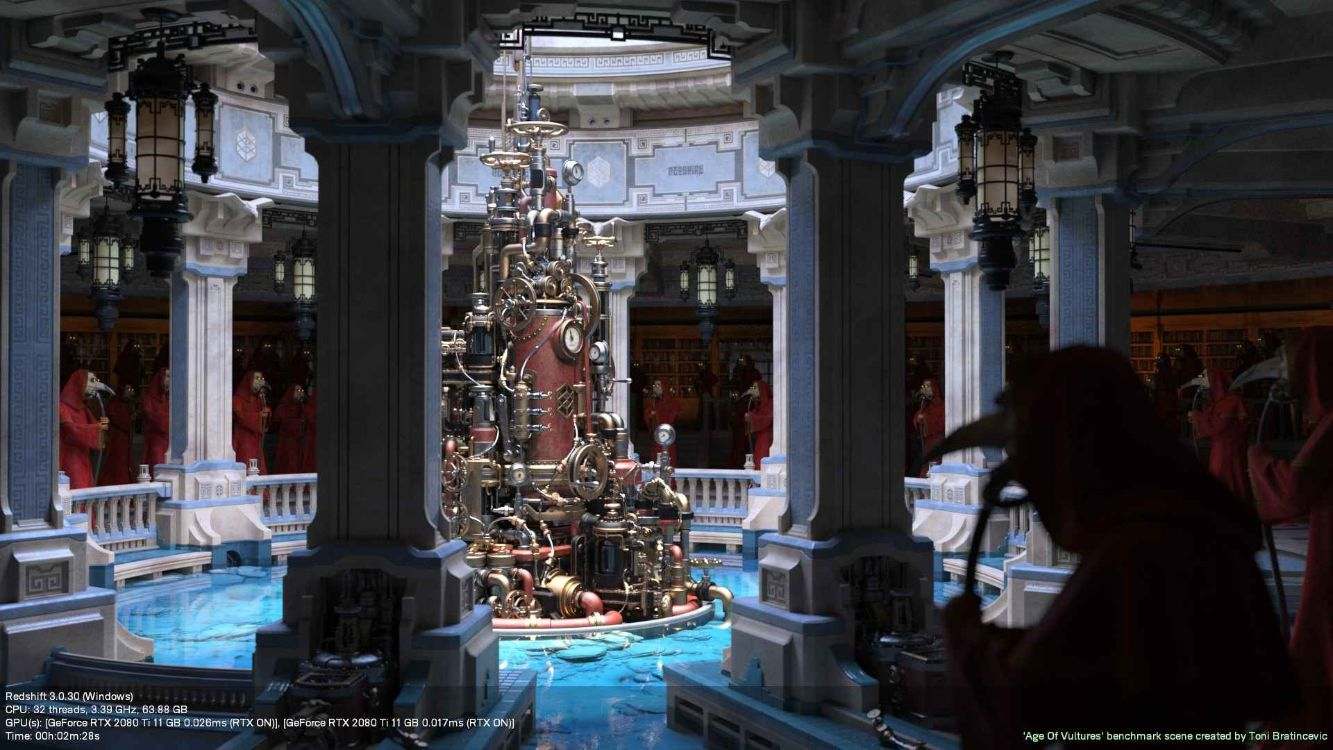 In certain rare cases, Redshift might produce these kinds of messages and abort rendering:

“VRAM” here means “Video RAM”: It’s your GPU’s memory. Even though Redshift supports out-of-core rendering, it needs a certain amount of free VRAM to operate. The above messages means Redshift failed to find that minimum amount so it couldn’t continue rendering. These out-of-VRAM messages mostly happen with GPUs with limited VRAM (like 4-6GB) or when there might exist other GPU-using apps running. GPUs that feature 11 GB or more VRAM are far less likely to produce such errors.

We recommend using Redshift on a GPU with as much VRAM as you can afford – for example a GPU with 11GB of memory or more. GeForce cards tend to have good raw performance, with decent amounts of video memory, while Quadro cards come with larger amounts of VRAM but also cost more for the same level of raw performance. To be more specific: 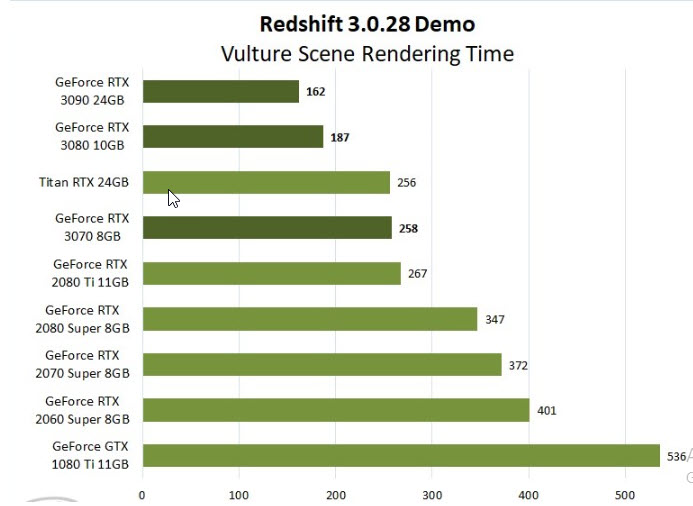 If upgrading your main GPU isn’t possible you could, alternatively, try using a relatively cheap GPU as your primary display. You can use a GPU as a primary display by connecting it to the appropriate PCIe slot in your computer (usually this is the top slot on the motherboard) and ensuring the monitor is connected to that GPU – and not the other GPU you’ll be using for rendering! Not connecting a monitor to a GPU is called “headless mode”. It means Windows and 3D apps won’t use that GPU and, therefore, won’t take VRAM from it – which makes it ideal for rendering with Redshift!

If you can’t afford a better or second video card, please review this list of common causes and solutions for the out-of-VRAM messages:

If you’re running with multiple video cards and have SLI enabled, you can get out-of-VRAM messages. This is due to a limitation of CUDA.

Solution: Please go to the NVidia Control Panel and disable the multi-GPU mode. Please note that, by doing so, video games will not be able to use multiple GPUs at once. Redshift will still be able to detect and use all GPUs in your system, though!

Windows Aero is a Windows Vista / Windows 7 feature that allows parts of windows to be semi-transparent. Even though this is a visually pleasing effect, it has the unfortunate effect of using considerable amounts of VRAM. Systems with weaker GPUs (in terms of VRAM) and Windows Aero enabled are more susceptible to out-of-VRAM situations.

The Google Chrome web browser can use significant amounts of VRAM, depending on the web content shown.

Solution: We recommend shutting down Chrome before rendering.

3D apps like Cinema4D, Houdini, Maya, 3DSMax,etc render their viewports using OpenGL. OpenGL uses your GPU so it, therefore, uses VRAM. Depending on the contents of the viewport, OpenGL can use a little or a lot of VRAM. Scenes that contain many triangles or use many textures and have hardware texturing enabled in the viewport settings are likely to use significant amounts of VRAM.

Solution: If your scene is heavy in terms of viewport polygons or textures, it is recommended you render using bounding boxes instead and disable hardware texturing. On Maya, Redshift recommends avoiding Viewport 2.0 as it can use significant amounts of memory.

Redshift is not the only application using the GPU! Programs like Photoshop, Mudbox and Nuke can use considerable amounts of VRAM, if certain GPU-acceleration features are enabled and used.

Solution: It’s not always obvious which application uses the GPU and how much memory it’s taking. So, if in doubt, it’s recommended that you shut down all ‘suspicious’ applications before rendering.

Solution: It’s recommended that you use Redshift with recent drivers. “Recent” doesn’t necessarily mean “the latest” – it means a driver that is no more than a few months old. Also, if you installed newer drivers, we recommend rebooting your computer. Finally, due to driver bugs or some ‘stuck’ 3D app, a reboot can sometimes fix out-of-VRAM messages.

Another instance of your 3D app & “Out-of-VRAM”

If your 3D app is being run multiple times, this can use considerable amounts of VRAM. In some cases, users are running multiple instances without even realizing (because of a software crash).

Solution: We recommend running only one instance of your 3D app. It’s also worth checking in the Windows Task Manager and ensuring you don’t have multiple instances of Cinema4D, Houdini, 3DSMax, Maya running. This can happen if your 3d app crashes but doesn’t get cleanly removed from memory. 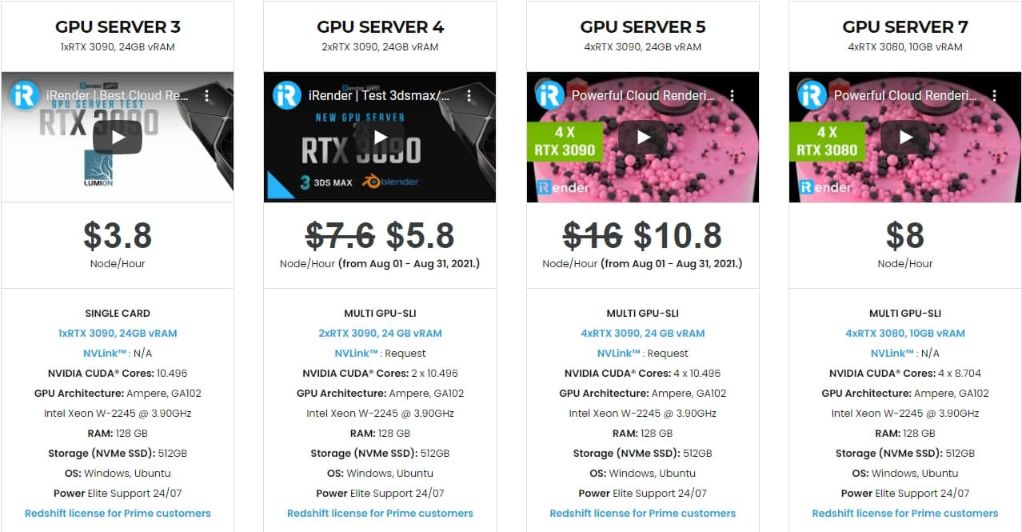 The servers’ configuration of iRender not only surpasses the minimum hardware requirements of Redshift, but also exceeds the recommended requirements. Redshift supports multi GPUs on one machine, increasing rendering performance multiple times. This is one of the main reasons we recommend these 4 packages for designers to have a flexible choices based on their budget and time. Moreover, this package uses Nvidia GPU cards with a VRAM capacity minimum from 10GB up to 24 GB. In addition, with NVLink available,VRAM is now going to be up to 48GB (RTX3090), helping you to store and solve large and complex scenes or datasets.  So, do not hesitate anymore, let’s register an account HERE to get FREE COUPON to test our GPU servers and reach a new level of cloud rendering.