Autodesk has released Bifrost for Maya 2.1, the latest version of the Maya multiphysics plugin.

Many of the changes are compatibility-breaking, with scenes created in earlier versions of the plugin requiring manual updates before they are compatible with the new functionality. 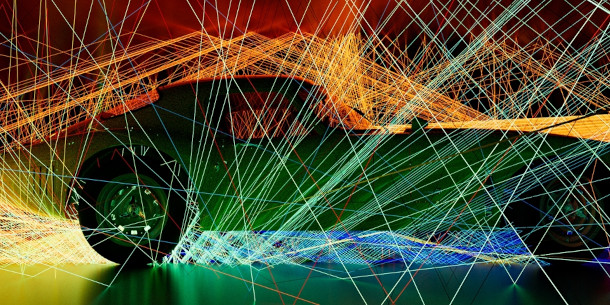 The plugin, an expanded version of Maya’s original Bifrost Fluids simulation toolset, includes solvers for combustion and granular materials as well as liquids, and is available free with Maya.

This update is the largest since Bifrost for Maya 2.0, the version originally released with Maya 2019.2: while Autodesk has put out updates steadily since then, they have mainly been bugfix releases.

New functionality includes four new geometry query nodes, enabling users to identify the closest points on surrounding geometry or the ray cast locations for a given point in a scene, and to sample data from them.

According to Autodesk, this opens up new simulation workflows, making it possible for “a range of new compounds to easily be created, including collision deformers and attribute transfer”.

The queries can be visualised in the viewport with arrows, as shown in the image below.

However, the changes break backwards-compatibility, meaning that graphs created using the geometry query nodes available in earlier versions of the plugin will need to be reconstructed manually. 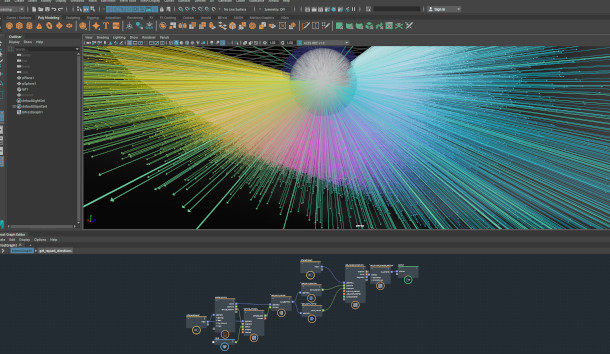 Under the hood, the basic_aero_graph and basic_particles_graph have been streamlined, now including only the mimimum nodes and properties required to run a smoke or particle simulation.

Custom properties can be added via “new menus and shortcuts”, both in the graphs themselves and the source_mpm_sand, source_mpm_snow and source_mpm_fluid nodes, used for particulate and liquid sims.

According to Autodesk, the changes result in “up to ten times speed improvements with graphs that make heavy use of indexing into arrays inside loops”.

There are also quite a few new utility nodes and new properties for existing nodes: you can find a complete list via the links right here and here.

Again, the changes are compatibility-breaking, meaning that the nodes and graphs affected will need updating to their new versions before legacy scenes can be used with version 2.1 of the plugin.

Workflow improvements include changes to the UI for the FCurve Editor, including a new thumbnail curve display. The editor also now supports pre- and post-extrapolation functions.

In addition, the interface for Bifrost graphs has been updated, with a new icon to identify auto-looped ports on nodes, and value nodes now displaying the number they represent on screen.

Users can also resolve the type of overloaded ports on referenced nodes by right-clicking and selecting from a list of options, rather than having to create an explicit value node.

Pipeline integration improvements include improved Alembic support, making it possible to export animation as a single file, rather than generating a separate file per frame of a simulation cache.

It is also now possible to render Bifrost simulations over 4GB in size using Autodesk’s Arnold renderer: functionality added in version 4.0.3 of the Maya to Arnold (MtoA) plugin earlier this year.

Developed by Lightmap, HDR Light Studio is a dedicated lighting application that is used tethered, via a plug-in, to 3D…

Developed by 3DQUAKERS, Forester is a plugin for Maxon Cinema 4D that provides tools for the creation of natural elements…