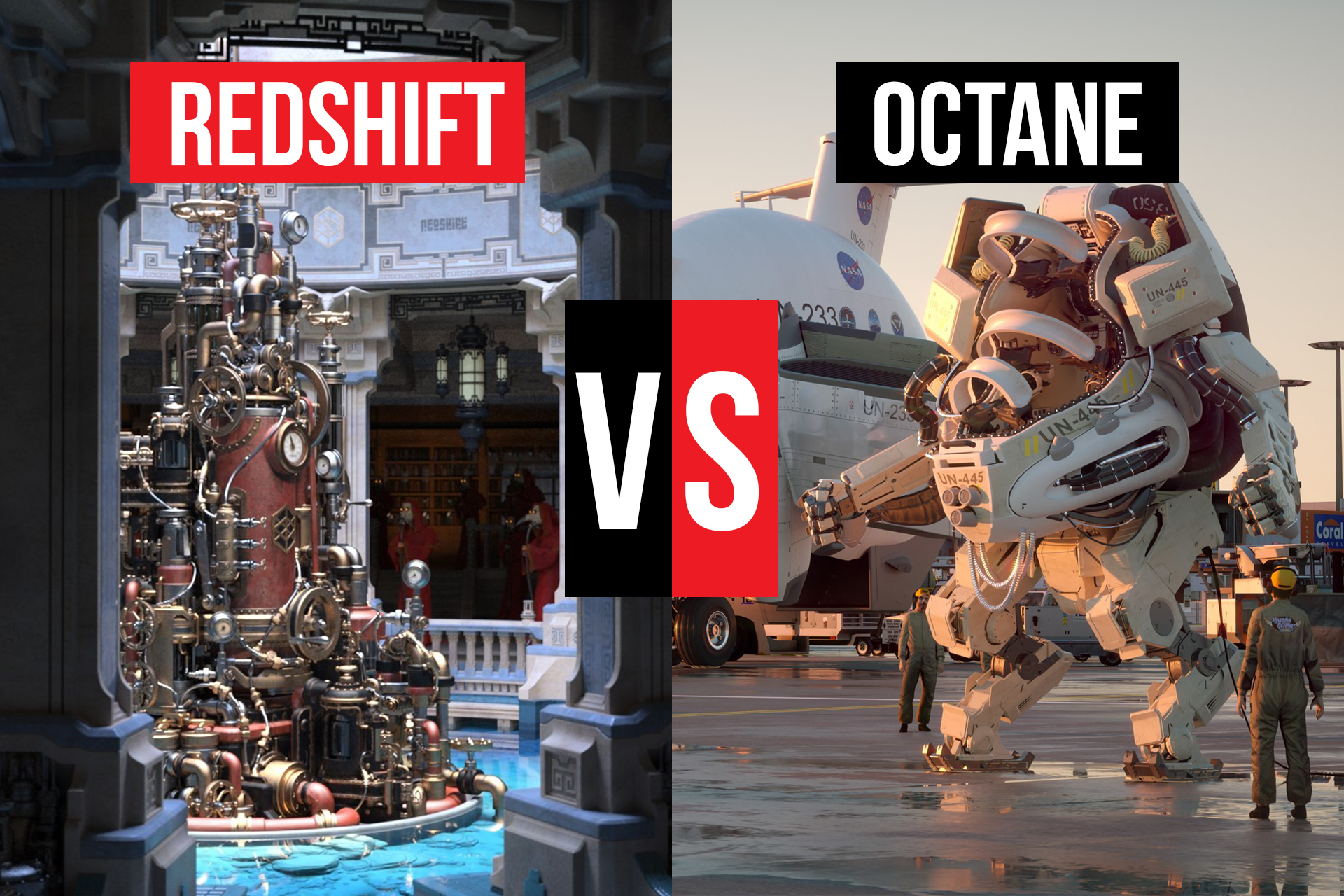 Receiving dozens of questions from our customers asking about Redshift vs Octane, which render engine is best for Cinema 4D software with GPU rendering?

We decided to make a series of comparisons between a biased render engine and an unbiased render engine for Cinema 4D. They’re so-called Redshift vs Octane that have widely affected the CG industry. Before jumping into detailed analysis, we want to talk about the overview of these 2 render engines. Indeed, they are both useful and powerful. But each one of them has specific different features.

Redshift is a biased, production-quality GPU accelerator render engine. What a biased render engine means basically you can bias your light rays and samples to specific parts of the scene that may need more focus. Redshift offers more control over the scene and how certain aspects react to certain lights in the scene. You can get faster light calculations and faster render time.

In this post, we’re gonna do a speed comparison and render on a 4x RTX 3090 server on the iRender cloud. The detailed hardware specifications:

With the same lighting settings, we’re gonna compare 6 types of materials, including diffuse, plastic, gold, glass, jade, and texture. Then, continue the comparison with a final scene merged by these materials. The total number of frames for the scene is 90. 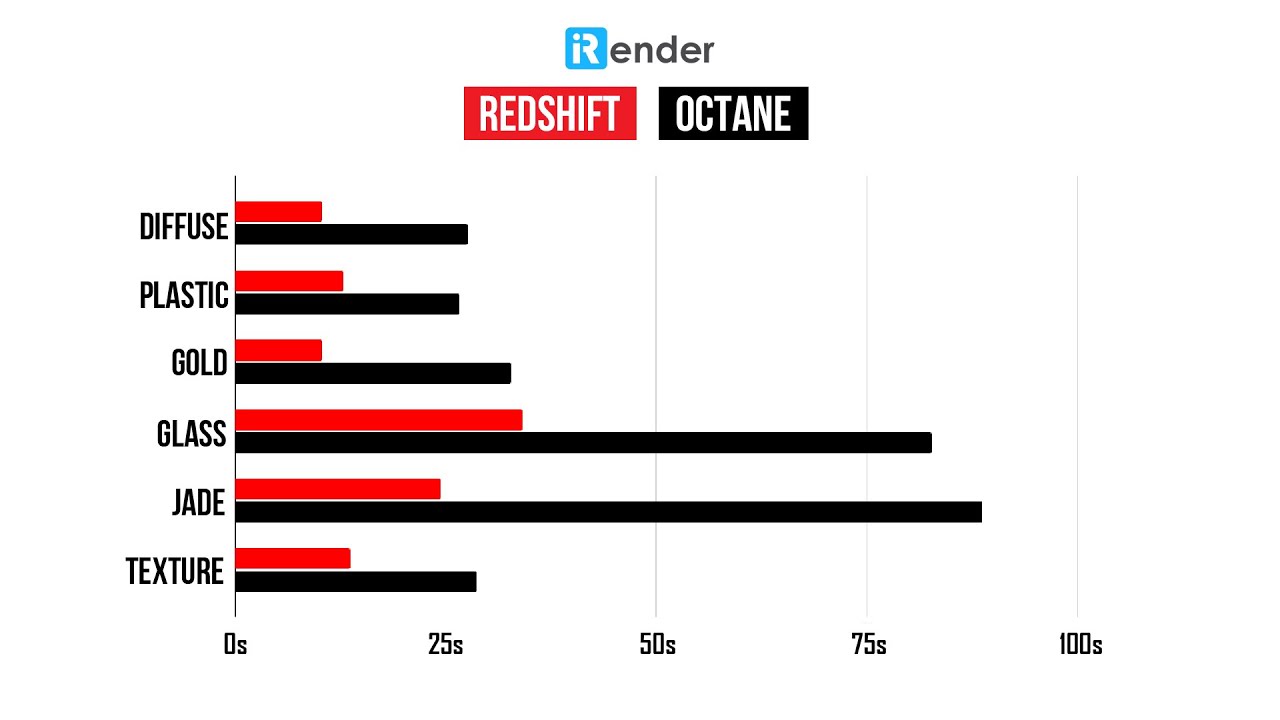 For the first scene here, there is a statue with diffuse material and HDR light. As we can see, there is a slight difference between the 2 results. The Octane shows more contrast, brighter light, darker shadow, even with the same lighting condition as Redshift.

Redshift took 15 minutes 26 seconds to render. While the render time of Octane was 2 and a half times longer, with 41 minutes 22 seconds. Although this scene is quite simple, Redshift shows how fast it was. 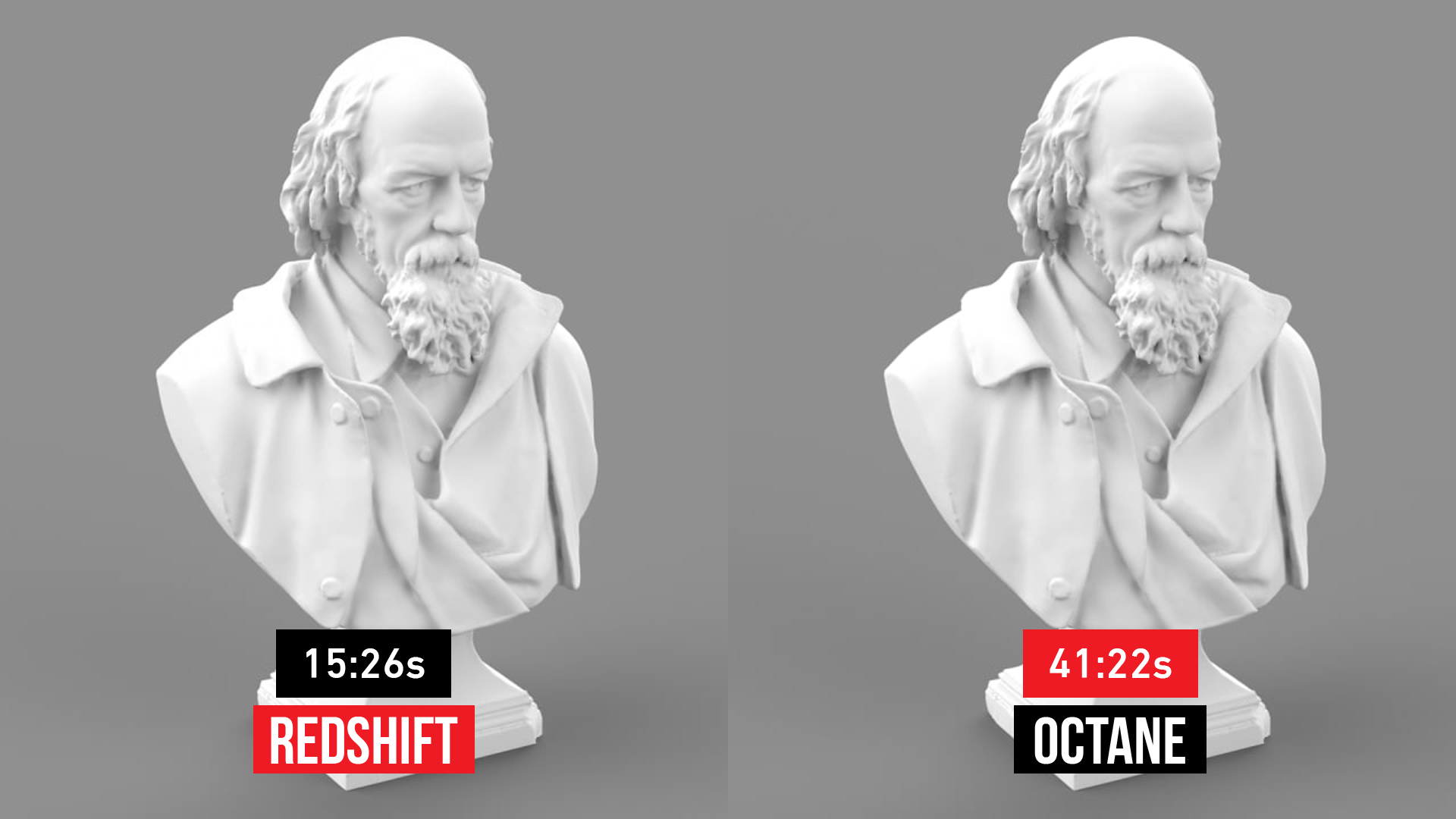 Moving on to the next scene, we have the plastic material here. In this scene, the plastic showed a reflection, but not too different between Redshift and Octane.

When it comes to the render time of this scene, again, Redshift was much faster with 19 minutes 13 seconds, while approximately 40 minutes is the number of Octane. 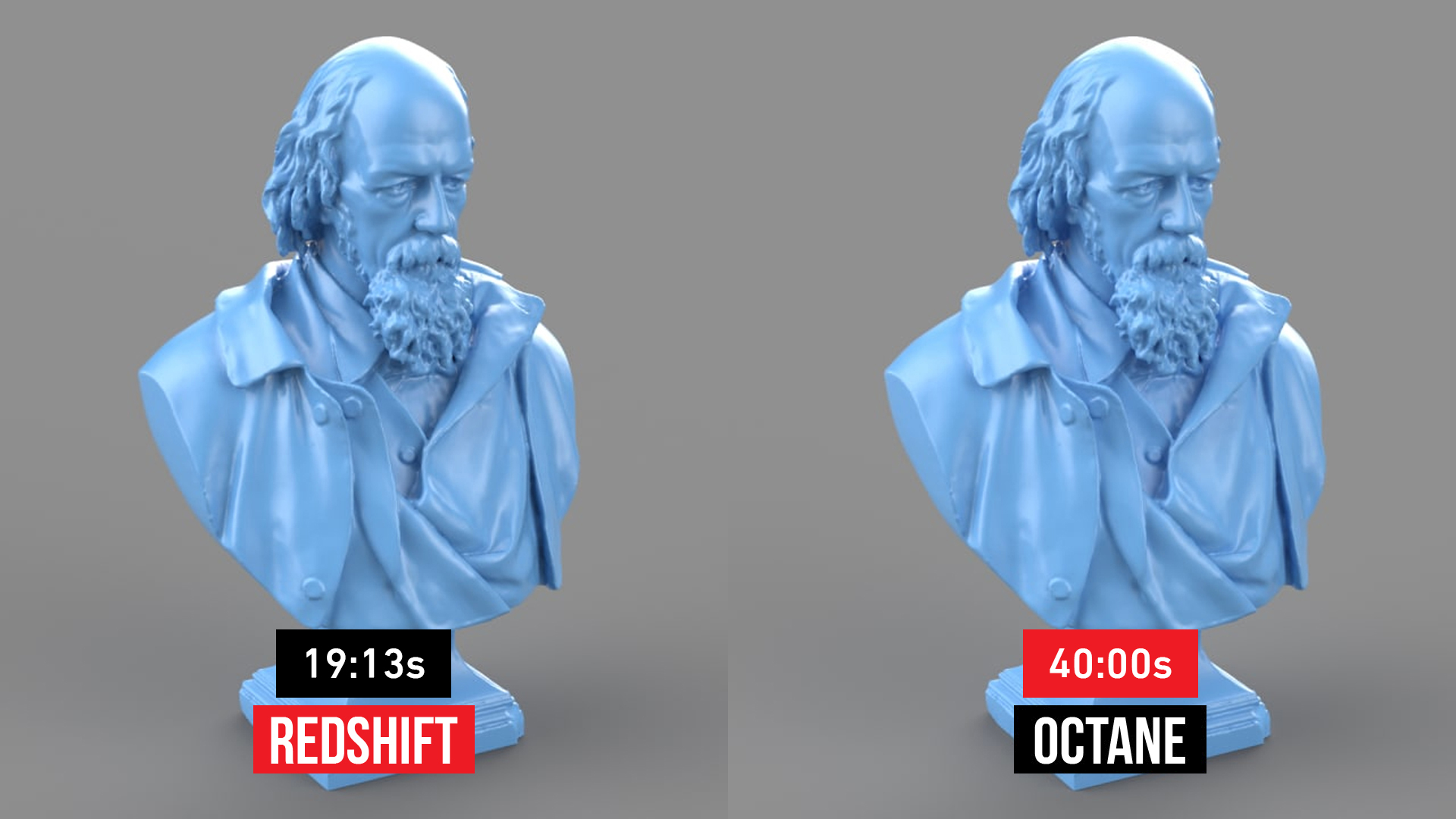 The 3rd material is gold. Gold is a metal so it has a very strong reflection. 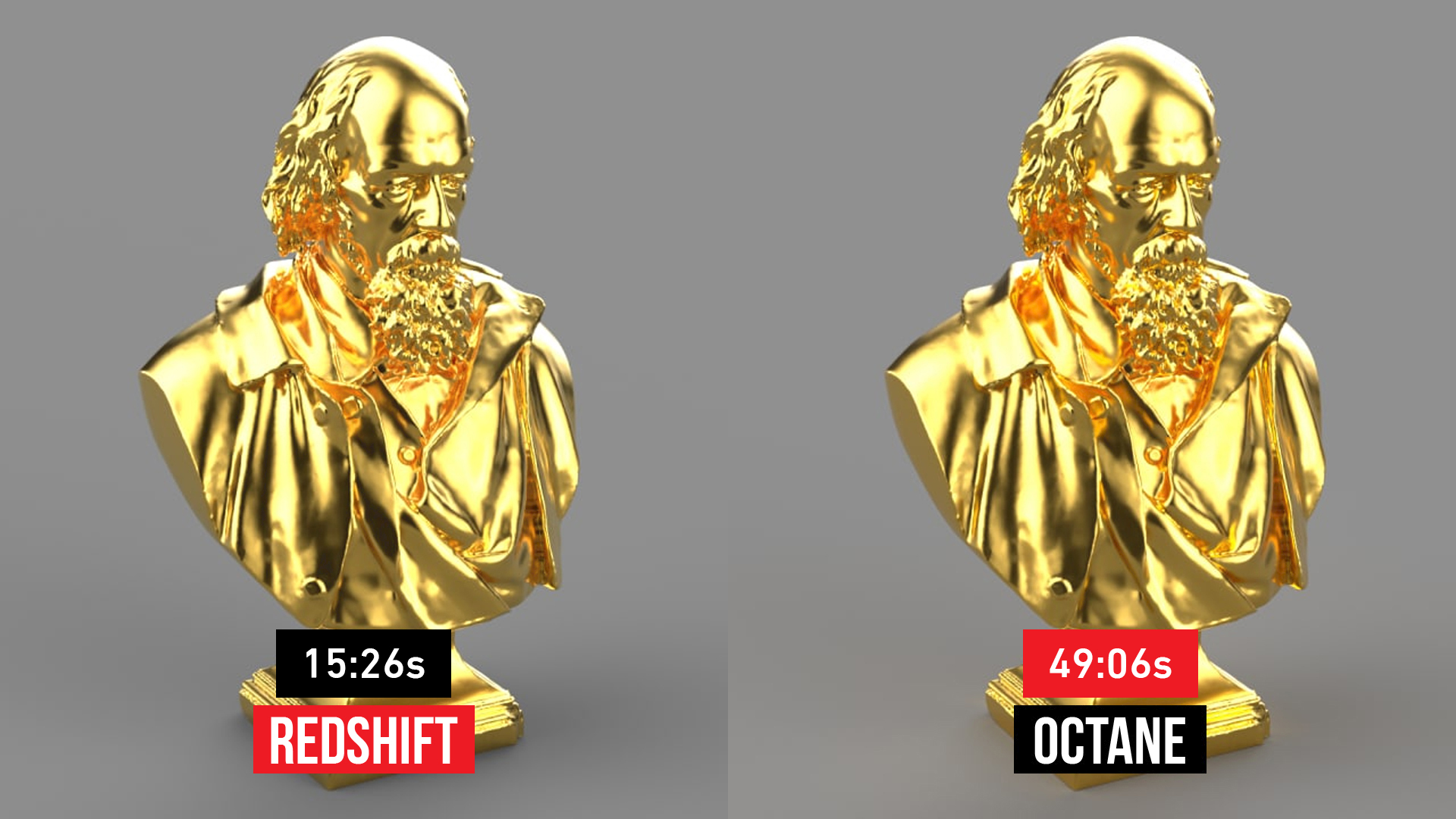 The 4th material, glass. In this scene, we made glass with transparency and reflections on the floor. Light is distorted when passing through a curved piece of glass.

Looking at the results, the Octane had more light reflex on the surface and still had the shadow underneath while the Redshift’s shadow was almost gone. But in terms of speed, Redshift took 51m14s while Octane took 2h4m8s to render. 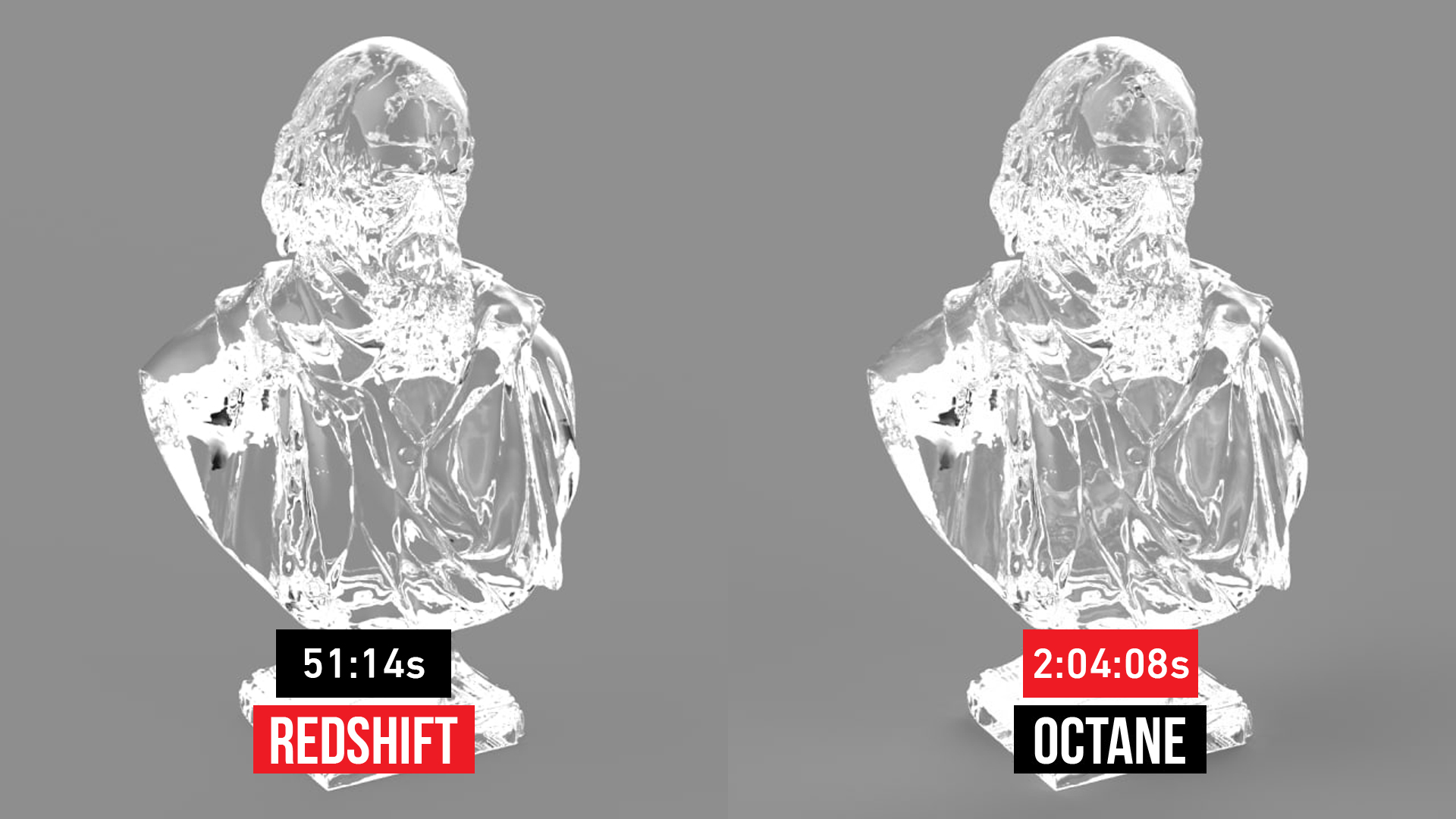 Next, the 5th material, Jade, is interesting. There was a slight reflection on the surface, and there was also a light bounce back inside the material. The results show a huge difference. Octane outperforms Redshift as it looks much sharper. However, the results may get more closely similar when 3D artists adjust the settings. 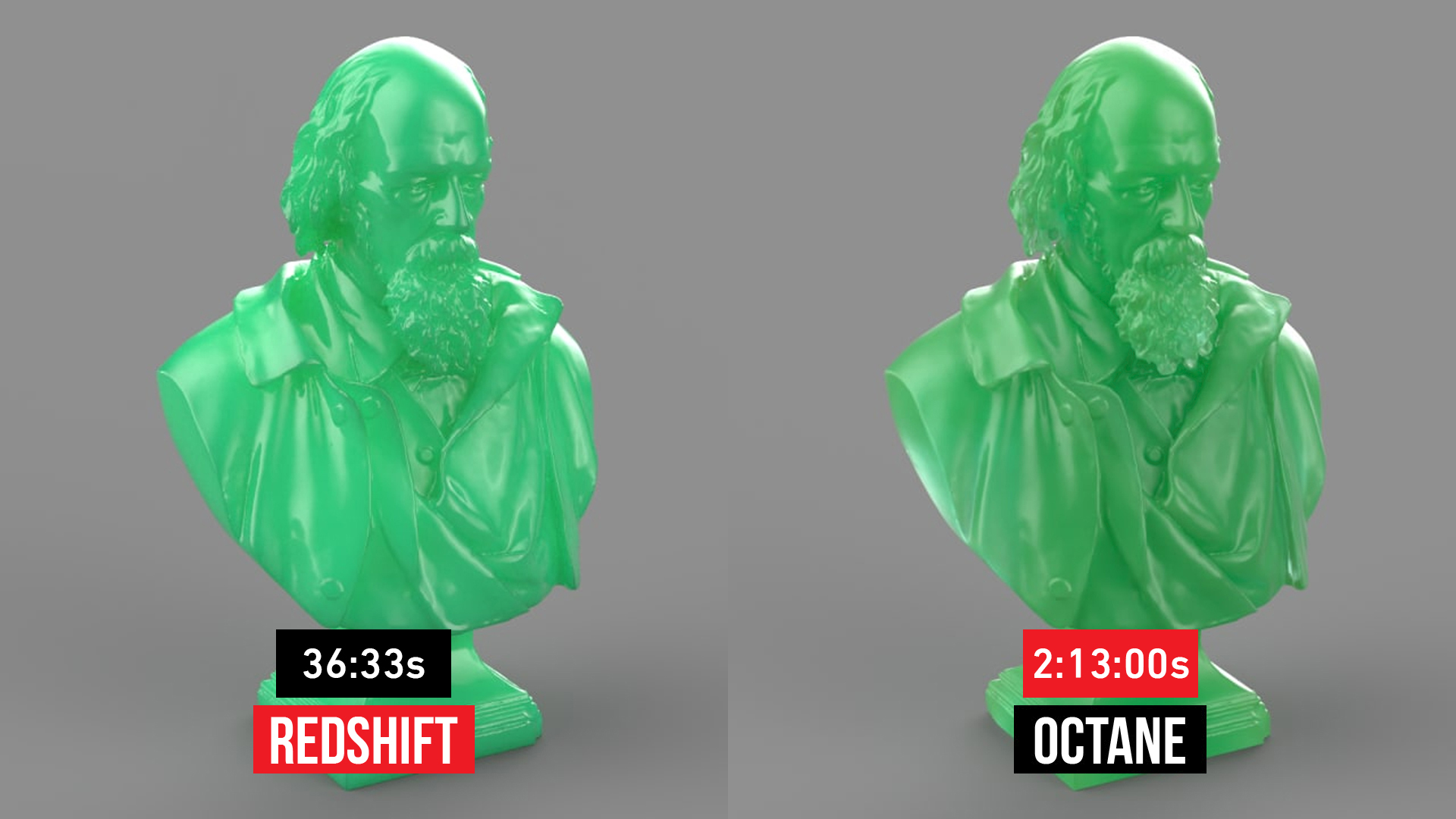 In the 6th comparison, we use image texture for the statue, so it is supposed to have the same result.

Interestingly, the difference is Octane with more contrast and more detailed texture. To render this scene, it took Redshift 20 minutes 39 seconds, while 42m59s for Octane. 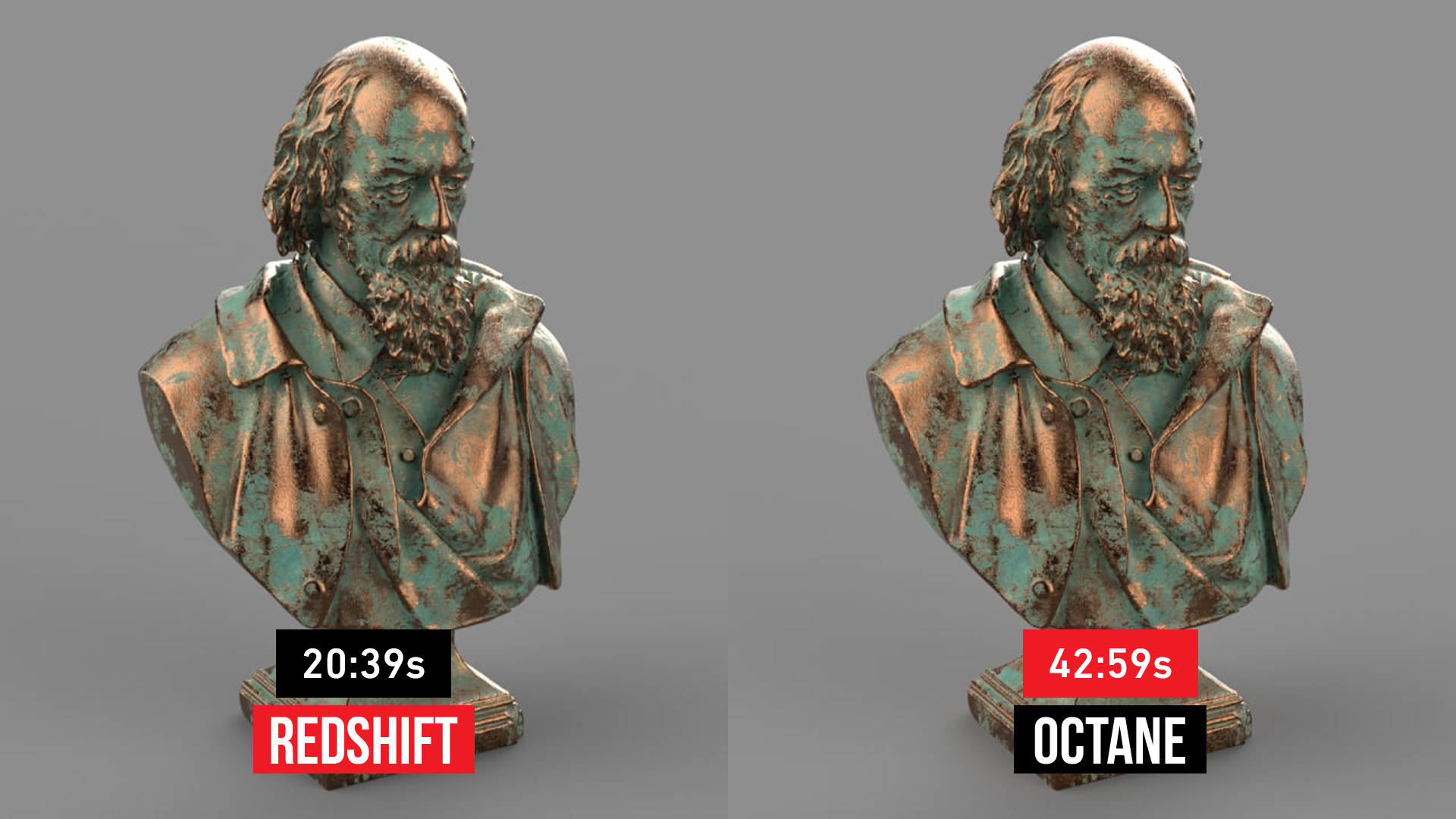 Finally, there is a final scene with the above 6 materials. In this scene, we have a clearer view of how materials affect each other. We can see how the light goes through glass and reflect on the other side of the statue, how the gold reflects other material, and so on. 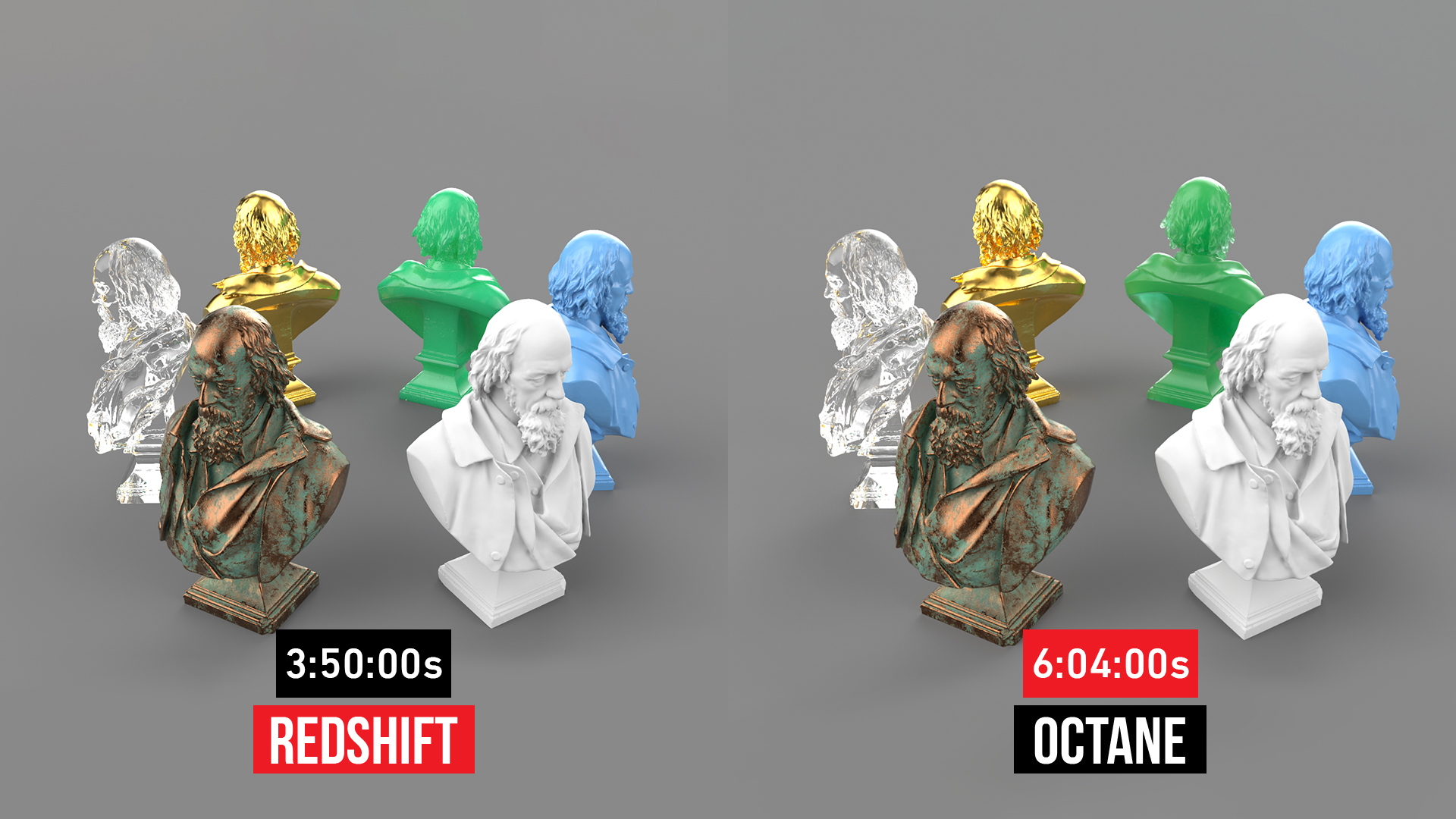 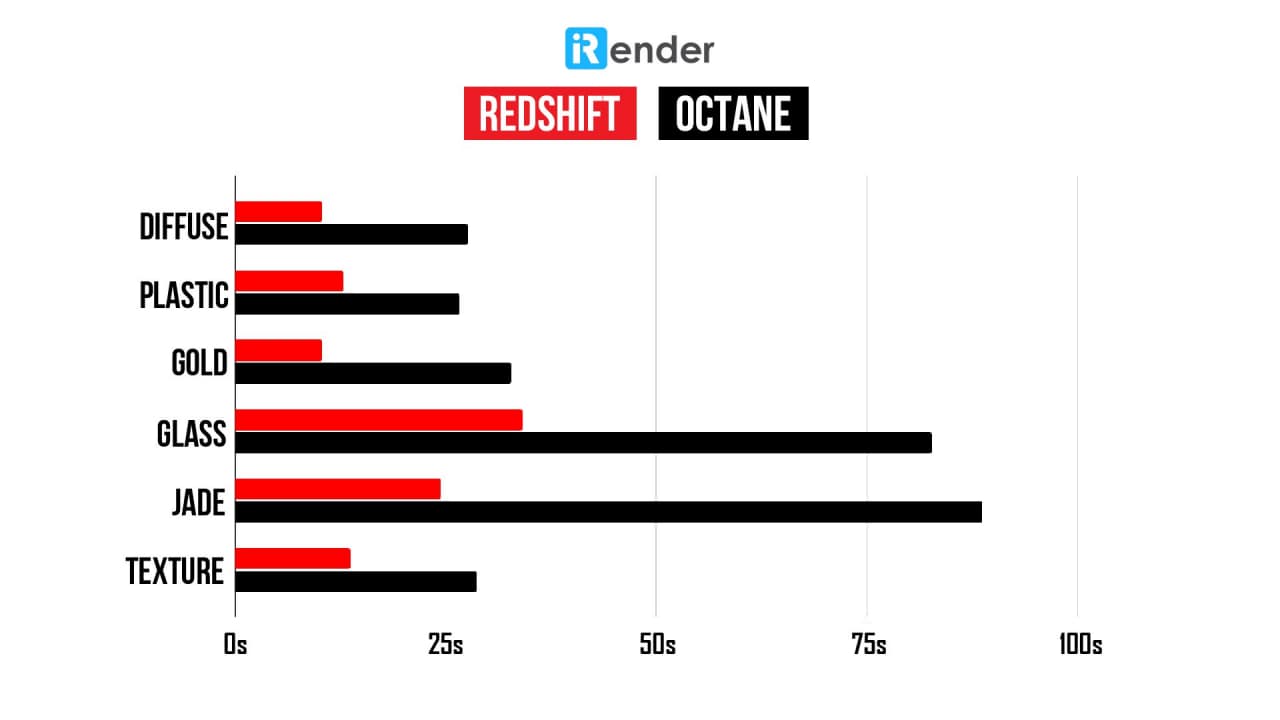 In conclusion, in terms of speed, Redshift always came first. On the other hand, the image quality of Octane was better with regard to some factors.

If you think that you can improve the time by better setting, you’re right. An experienced Octane artist could reach the same speed as Redshift. Likewise, an experienced Redshift artist could also reduce their render time further. So remember that these are the base speed. You should drill down into each factor and arrange factors in order of priority before deciding which render engine is the best for you.

In iRender render farm we always pre-install both Redshift and Octane plugins so that you can experience both tools in your project.