Most recently, the Blender Foundation has shipped Blender 3.1, the latest version of this open-source 3D software. It’s a performance-focused update, with speed boosts to workflows ranging from animation and scene layout to rendering and file export, but as usual, there are scores of other features and updates to existing tools.

Below, let’s take a look at five features that are considered to be the most significant, including the new Metal backend for Cycles, GPU acceleration of the Subdivision Surface modifier, and the latest updates to Geometry Nodes. At the end of the story, you can take a quick tour through the other changes. 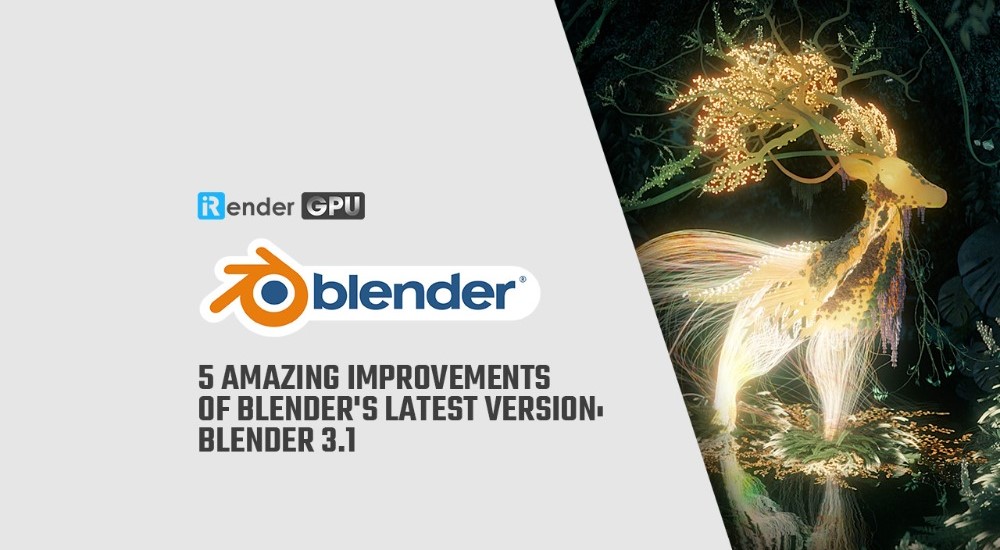 Probably the most-anticipated change in Blender 3.1 is native support for Metal, Apple’s graphics API, in the Cycles renderer: work funded and partly carried out by Apple itself.

Rendering performance on macOS began to lag behind that on Windows and Linux following Apple’s decision to deprecate OpenCL, originally used for GPU acceleration in Cycles. Most Mac artists are also unable to use Cycles’ CUDA and OptiX backends, which require Nvidia GPUs. The new Metal backend accelerates rendering on Macs with Apple’s own M1 processors or AMD GPUs, with support for Intel GPUs also in development.

Another key change to Cycles in Blender 3.1 is support for point clouds as a native geometry type. To be more specific, motion graphics animations and simulation caches imported from other DCC applications as point clouds should now render significantly faster in Cycles and use less memory while doing so.

Points are currently always rendered as spheres, although artists can control their size and randomize their color using the new Point Info node. More 3D shapes are “likely to be added later”. Support for point clouds as a native geometry type in Cycles speeds up renders of imported simulation caches. 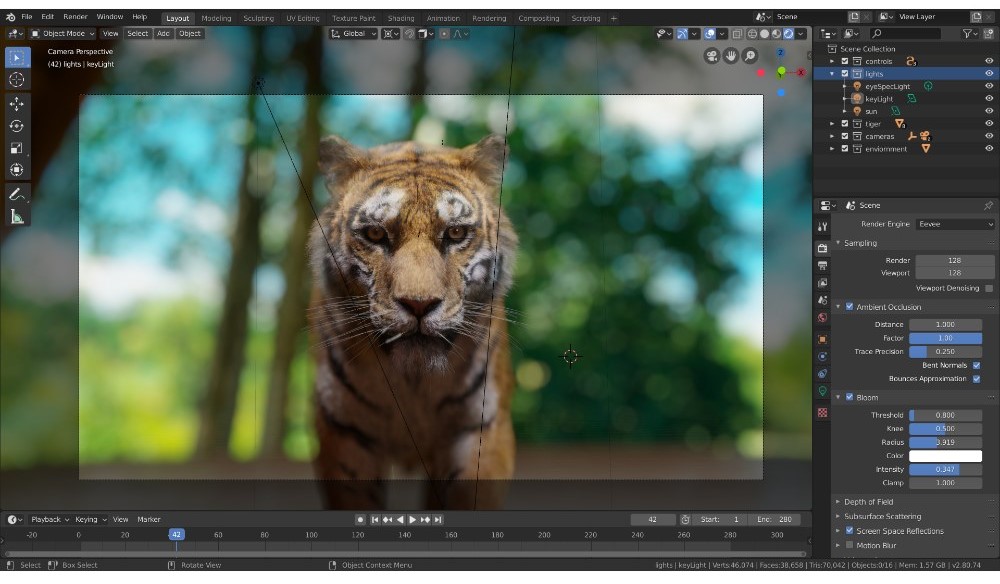 Artists can also generate point clouds directly inside Blender using the Geometry Nodes system, originally introduced in Blender 2.92 for object scattering and instancing. The 3.1 update sees it continue to evolve into a more general toolset, with nodes like Extrude Mesh – one of 19 new nodes in the release – opening up new procedural modeling workflows.

Working with node graphs should also now be a lot more interactive, with large node trees now displaying “nearly 2x faster”: just one of a long list of speed boosts and reductions in memory use.Other workflow improvements include a new context-aware search menu that pops up inside the Node Edior when dragging on sockets, showing only those nodes that can actually be connected to the one selected.

The Subdivision Surface modifier gets support for GPU acceleration in Blender 3.1. The change should make it easier to work with any mesh that is being smoothed using subdivision at render time, but one particularly common use case will be playing back character animations in the viewport.

For modeling work, the Subdivision Surface modifier also gets support for vertex creasing, making it possible to mark vertices as arbitrarily sharp to create a range of interestingly spiky new shapes.

Grease Pencil, Blender’s ever-evolving 2D animation toolset, also gets some nice new features in Blender 3.1. The Line Art modifier, used to generate outline renders of 3D objects that can be used as Grease Pencil strokes, gets a number of new options.However, the most visually pleasing change comes when filling closed strokes with colour: the Fill tool now has a Dilate/Contract setting to expand or shrink the fill area.

That makes it possible to create effects in which the fill overlaps the strokes, or a white border is left inside them, as shown in the image above. 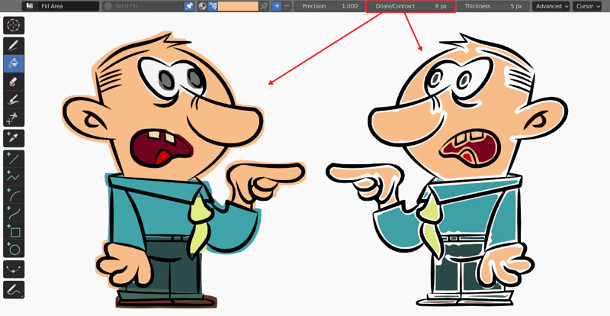 Blender’s other toolsets see fewer changes, although there are some useful quality-of-life updates. In the Texturing tools, tiled images now support file names containing UDIM substitution tokens. It makes implement UDIM workflows of the type widely used in visual effects and game development. The Animation toolset gets the option to manually specify the frame range of action in the Dope Sheet. Morover, the  Action Editor, and NLA Editor, and to make handle lengths uniform in the Graph Editor. Changes to the user interface include the introduction of the View pie menu to new parts of Blende. And including the animation editors. It is now possible to view much larger images in the Image Editor.

There are also significant changes to file import and export. A new C++ OBJ exporter speeding up export of OBJ files by up to 13x, and improvements to Alembic, glTF and USD export. Finally, Blender 3.1 now uses Python 3.10.  Following the Blender Foundation’s decision to break away from the VFX Reference Platform and support a more recent version of the programming language. The change may prove controversial for larger studios integrating Blender into their production pipelines, and is discussed in more detail in this blog post.

Regarding system requirements, Blender 3.1 is available for Windows 8.1+, macOS 10.13+ and Linux. It’s a free download.

We believe that ‘less is more’, so we design the user’s interface easily to use. It takes just a few steps to get started. First, register to the service, then create a new work environment or better known as a system image. The system will save and load the work environment for the user as soon as logging into the account. The file transfer process is unique, it can transfer files even when the server is turned off, so the users can make changes at any time and it’s free to transfer. Furthermore, major cloud transferring platforms like Dropbox, Google Drive is also supported. Additionally,  user can also use multiple servers at the same time to speed up the render time as fast as they want.

You only pay for the time you used our server on a per-minute basis. Depending on the type of server you choose, we will issue you an invoice once you shut down the servers, so that you will control your balance easily. Moreover, you can always save up to 20% with our Fixed Rental feature. For those who’re in need of a server for more than a day, or have an extremely large project, we advise to choose a daily/ weekly/monthly rental package. The discount is attractive and help to save more for your render.

We accept payment through PayPal, Onepay, bank transfer, or credit card,  And of course, we sometimes provide promotions for customers on special occasions. Staying connected with us to keep updating these programs.

If you choose to render your projects with iRender, you can feel extra safe that we have a dedicated CPU & GPU infrastructure and enthusiastic technical supporters available 24 hours a day, 7 days a week to answer any queries you might have regarding your rendering jobs.

If you are a new iRender user, just register HERE to get FREE COUPON to test our servers with your Keyshot scenes and stay tuned for more interesting and useful articles related to rendering everyday. SPECIAL OFFER for this February: Get 20% BONUS for all newly registered users. Let’s CHECK IT OUT!