As you are reading this article, you are probably already learning or using Blender. But have you ever wondered why learning 3D with Blender is attractive in the middle of a forest of other famous 3D graphics software?

Blender is a free 3D design software with a diversity of functions and plugins, backed by many big artists and companies behind. Blender is released under the GNU General Public License (GPL, or “free software”). In the scope of this article today, iRender will help you evaluate the aspects between Cycles vs Eevee. It’s tempting to think of features as a checklist (ambient occlusion, refraction, etc.…), see that they are present in both engines, and assume that they are both capable of the same things. However, because of their differences in rendering methods, Eevee renders can get convincingly close to Cycles in many areas. 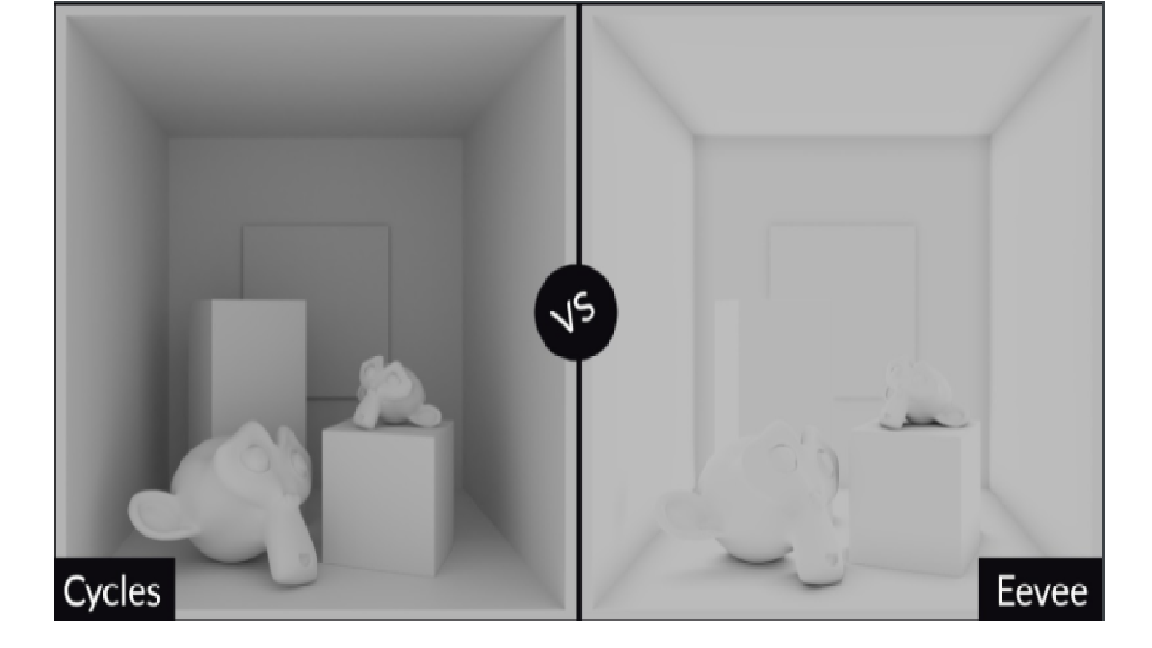 Cycles ambient occlusion is based on the distance between surfaces in 3D space. Eevee AO is based on the distance between surfaces according to the 2D image the screen sees. It manages to still look quite good because it uses a depth pass to determine where to fade out the AO so that it doesn’t cast on objects far behind it (you’ll notice this in 2.79’s viewport AO). However, you’ll still often see occlusion ‘attach’ itself to objects before the depth cutoff takes effect. 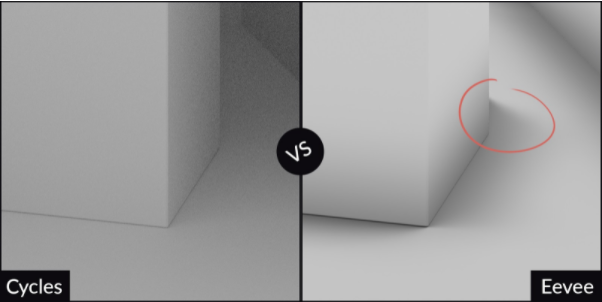 Eevee can only occlude a set distance away from an object. In the first Cycles render above, notice how the sides of the box have large gradients and the surfaces where the monkey heads sit have small gradients. The combination of both sharp and broad transitions between light and dark looks very natural. In Eevee, both areas of gradients are the same size, causing the sides of the box to look flat and the occlusion beneath the monkeys to look overly dark. 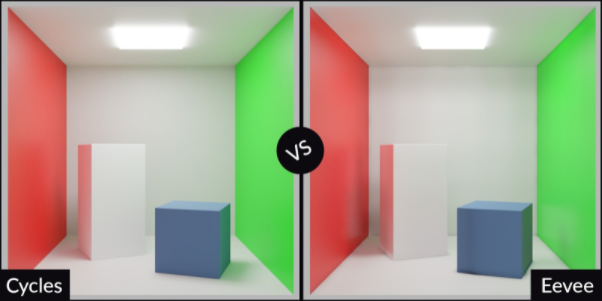 Cycles has global illumination (a.k.a indirect lighting, radiosity, etc…) baked deep into how it works. Light paths pick up data (like what color has already been absorbed) from each time they bounce and uses that information to determine what to do when it hits the next surface.

Eevee definitely uses light probes to approximate it. Light probes essentially take snapshots of the scene from their point in space, and project the appropriate colors onto objects in their vicinity. This is called baking, and the data is stored and not updated every frame. Therefore, objects with baked indirect lighting should not be animated.

An massive amount of light probes would result in the scene looking about the same as in Cycles, but of course that would take an eternity to bake. The limited amount of light probes means that the space between them must be approximated, which can result in artifacts. In the render above, notice the faint dark splotch on the blue cube, and the uneven occlusion where it meets the ground. 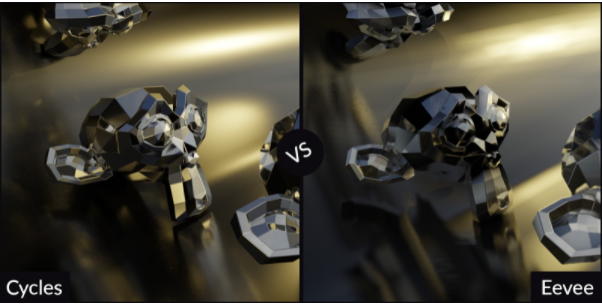 At this point you can safely assume that any feature of Cycles works by bouncing rays of light, so great reflections are not surprising. Eevee uses a couple tricks to try to mimic this, but of course it still ends up a ways away from accuracy. Screen space reflections work by taking the resulting image from the camera and flipping it around. This is fast and looks great in most circumstances, but cannot work with anything not seen by the camera such as the backs or bottoms of objects.

Eevee can also use reflection probes, which are planes, cubes, or spheres that act like virtual cameras. They render what is around them and then map that image onto the object. Since planes are quite simple they can be updated in real time, but cube and sphere maps need to be baked and therefore the objects they are getting data for will not look right when animated. It’s also rare that an object is a perfect cube or sphere, so the mapping will also introduce some imperfections.

We hope this overview will help you choose a suitable package. As you may know, iRender provides a high performance and configurable server system for 3D rendering, AI Training, VR & AR, simulation, etc. With our server, you can install any software you need, add your license, and do whatever you like with your project. These tools above are no exception. Most tools for fluids are computationally expensive. Understanding that, we have different config and package compatible with them, from CPU to single GPU, dual and even multi-GPUs.

Let’s see rendering tests with Blender on server 2/4/6x RTX 3090 the latest NVIDIA CARD RTX 3090 with 24GB VRAM will help you reduce your render time very much ​at iRender: