3Dsmax & Vray is a production-proven rendering software. Known for its versatility and ability to handle any type of project — from massive, dynamic scenes having thousands of lights to a sublime still life — it is the go-to solution for artists and designers across 3D industries.

Being known as the world’s most complete 3D rendering software for high-end visualization and production, this is a super perfect match. Last week, we already compared the performance in Redshift and Cinema4D. In this article today, iRender will continue to do another test to see how well does rendering speed scale across multiple GPUs in Vray & 3Dsmax.

Because the new RTX cards take advantage of RT cores in Vray Next, we will do the test with the beast RTX 3090 – based on the Ampere architecture. We think it’s fair to call this card a “beast”, not only because it will prove to be the fastest gaming and creator GPU on the market, but also because it will take up three PCI slots in your PC. To see how increasing the number of video cards in a system affects performance in Vray with the new GeForce 30 Series (Ampere architecture), we will compare the render time in Vray 5 and 3Dsmax 2020 from one GPU RTX 3090 to eight GPUs RTX 3090. Particularly, our project size is 4000p x 2200p at 1000 samples and the noise limit is 0.01.

For our test platform, we wanted to use a high clock speed processor so that the video cards could really shine. Because we do the test on multiple GPUs, we also needed a platform that would support as many video cards as possible in a large tower workstation. Given that combination of goals, the configurations which made the most sense was AMD Ryzen Threadripper Pro 3955WX. That provided the right PCI-Express slot layout for up to eight GPUs, and the clock speed runs fast: 4.3GHz base and up to 4.7GHz turbo.

The new Hybrid Rendering mode (since V-Ray 3.6) only works with CUDA mode, which requires NVIDIA graphics cards. Users using AMD will not get the embree acceleration because that’s an NVIDIA bonus. When the engine is set to V-Ray GPU with RTX enabled, V-Ray GPU uses the RT Cores in NVIDIA RTX GPUs. Render speed is primarily determined by the number of CUDA cores (the more the better) and the GPU’s clock speed. 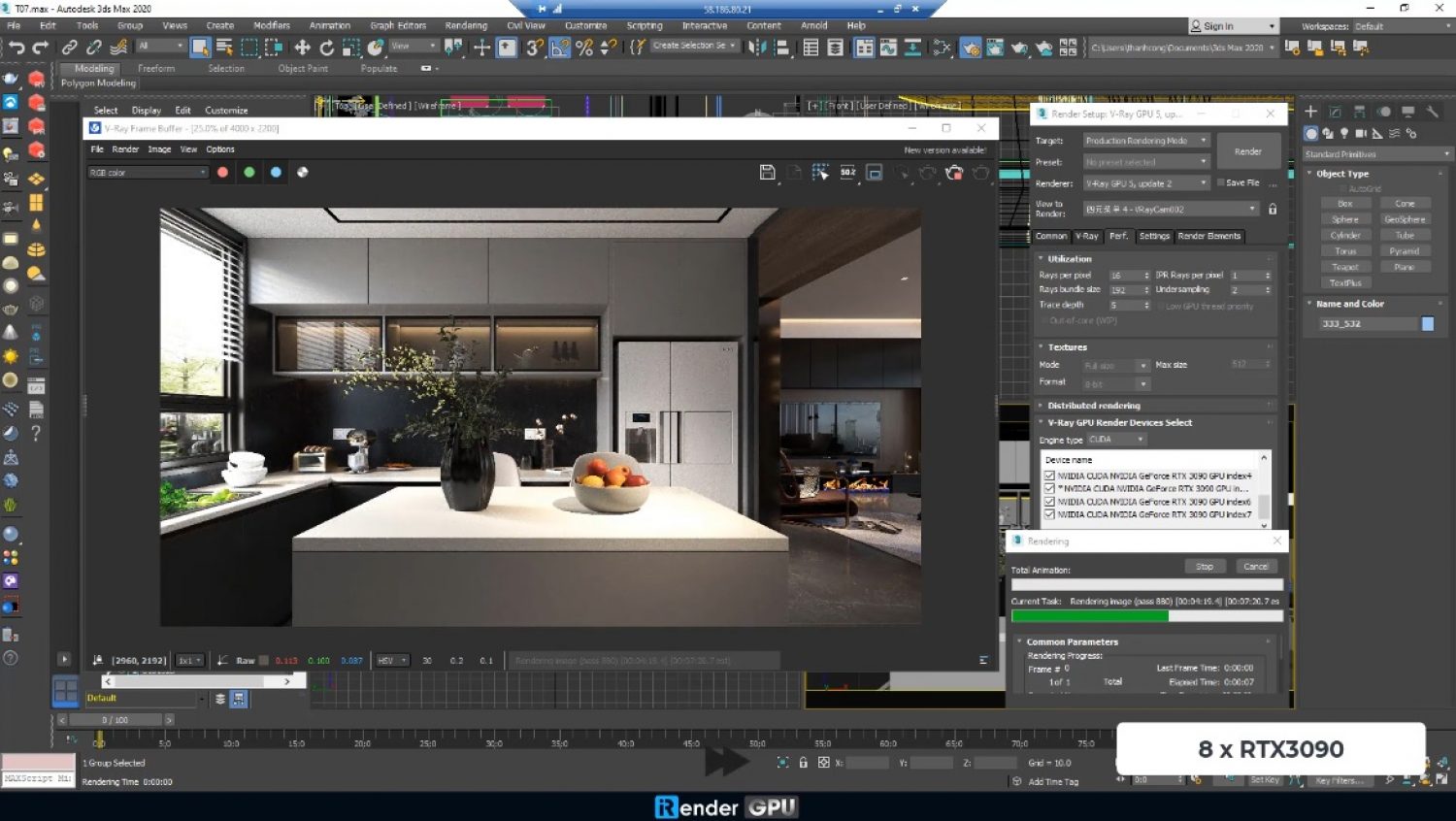 The GPU-accelerated version of 3Dsmax & Vray is able to utilize multiple GPUs and does so very effectively. It will not be a perfect “4 GPUs is 4x faster”, but you can expect significant performance improvements with every card you add. However, since V-Ray is using the cards for compute purposes they do not need to be in SLI mode. Looking just at the results of secondary cards, we can see that stacking a few of those will give fantastic rendering performance. According to the iRender test with RTX 3090, it is almost perfect scaling from 1 -> 2 – > 4 GPUs. Particularly, scaling from the second video card is still respectable – in the range of 29% to 57% improvement. This mirrors what we have seen in some other GPU rendering engines, like OctaneRender. That’s the reason we recommend using at least 2 GPUs for V-ray and 3Dsmax to get the best performance.

In particular, a single RTX 3090 takes 26m39s to render a still image. This may be an acceptable number for a local computer, but in this test, we want to analyze more about the performance. As demonstrated above, it is undeniable that our workstation needs at least 2 GPU if you are using this GPU-accelerated engine, therefore, we continued to test our server 4A and 5P then we got amazing results: dual RTX 3090 cut render time to 18m55s while with six GPUs it took only 11m38s.

Since the 6th and 8th cards were added, you may see it’s not a linear increase because sometimes it depends on the model that you’re running. However, the render time is still impressive for large projects that have a tight deadline (respectively 9m40s and 8m02s). It isn’t quite perfect – there is some level of diminishing returns – but it is still more than enough to justify their use in multi-GPU workstations and be super helpful for large projects. You can also do your test by signing up for an account here!

In addition to the RT Cores, the new RTX cards also support NVLink, which gives V-Ray GPU the ability to share the memory between two GPUs; this has some impact on rendering speed. And in this benchmark, Chaosgroup aims to measure it. In order to enable NVLink, the cards need to be connected with a special NVLink connector (also called NVLink Bridge). For NVLink to work on Windows, GeForce RTX cards must be put in SLI mode from the NVIDIA control panel (this is not required for Quadro RTX cards, nor is it needed on Linux, and it’s not recommended for older GPUs). If the SLI mode is disabled, NVLink will not be active. 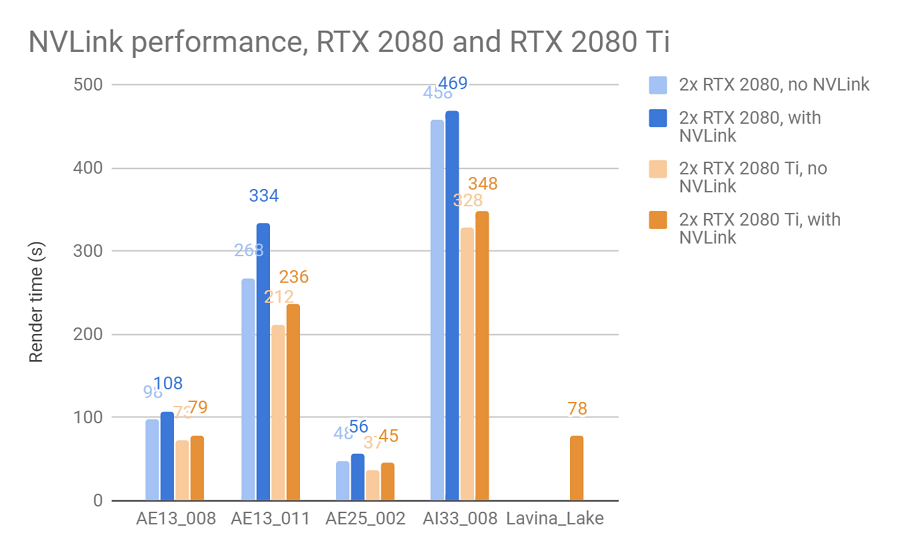 Note that the available memory for GPU rendering is not exactly doubled with NVLink; V-Ray GPU needs to duplicate some data on each GPU for performance reasons, and it needs to reserve some memory on each GPU as a scratchpad for calculations during rendering. Still, using NVLink allows us to render much larger scenes than would fit on each GPU alone. iRender support NVlink here!

For truly photorealistic renders, you want a raytracer that’s built for quality, optimized for speed, and ready to scale. V-Ray gives you the power to work with lightning-fast interactive and heavyweight production rendering—all while getting the most from your CPU and GPU hardware. Check out iRender workflow below:

If new hardware is not in your budget right now, join iRender and cut your render times in half with just some minor time investment from 3.8$. We do the rendering, the creativity is yours!