Blender has finally leveled up. On December 3, 2021, the Blender Foundation released Blender 3.0 – the first total version change for the incredibly powerful and widespread open-source visual software in over 21 years. There’s a lot of good new stuff in this release. In the last article, we’ve dug into the latest update to take a look at it from Cycles performance perspective. In this article, join us as we throw all of the current-gen GPUs from GeForce and Radeon at Eevee Render and the viewport. 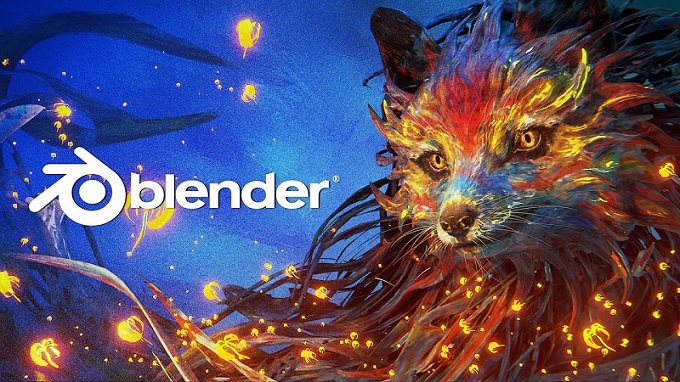 We’ve now moved onto two new animation projects. Of the two, Red Autumn Forest is the more GPU hungry, as it’s not as reliant on the CPU through its render. Splash Fox is different, in that it takes larger breaks in between each frame render to take care of compositing tasks. Let’s see how these projects compare in our testing: 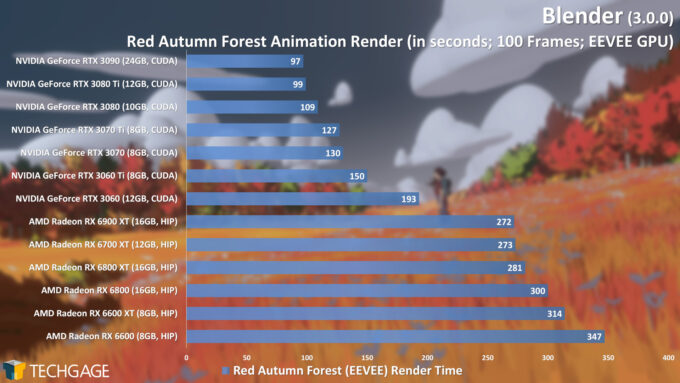 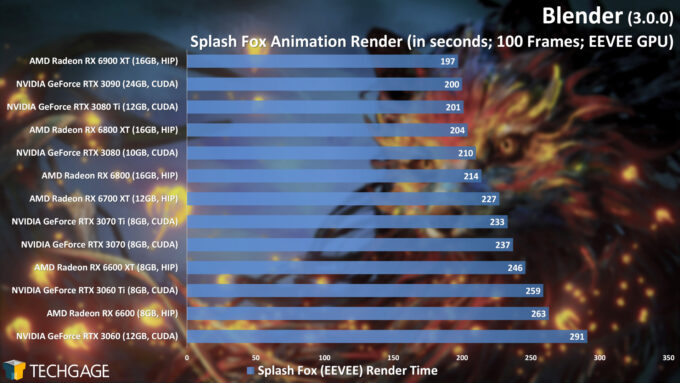 These results are far more interesting than the ones we used to see, Red Autumn Forest uses the GPU more throughout its render process than Splash Fox does. In the test with an RTX 3090, we found that Red Autumn Forest used the GPU 70% of the time through the process, whereas Splash Fox dropped to 40% average usage. The fact that the CPU is involved a lot more in the Splash Fox render is made obvious with the tighter scaling between all of the models.

While NVIDIA won the EEVEE battle against AMD with Mr. Elephant, the gains in Red Autumn Forest are much more pronounced – there’s a clear separation between the vendors. But, in the more complex Splash Fox project, AMD’s Radeons perform great overall. To wrap-up our performance testing, we’re going to set aside rendering to test out the performance in Blender’s viewport in the next part.

We mentioned in the “What’s New?” section of the last article that Blender’s viewport has seen some performance improvement in 3.0, but that’s largely related to using the rendering mode, which is both difficult to measure for benchmarking purposes, and made a little redundant with our numerous actual rendering tests. Most didn’t change too much, but some did. 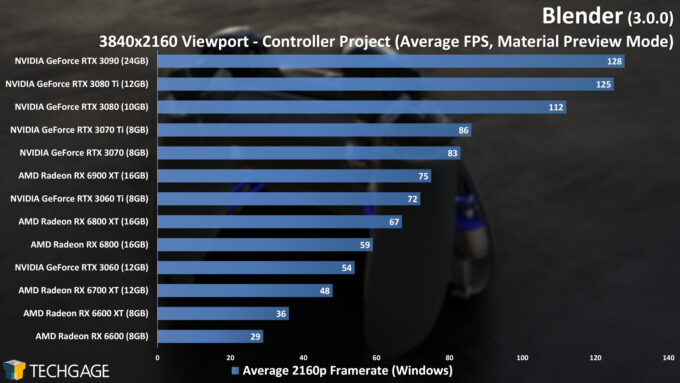 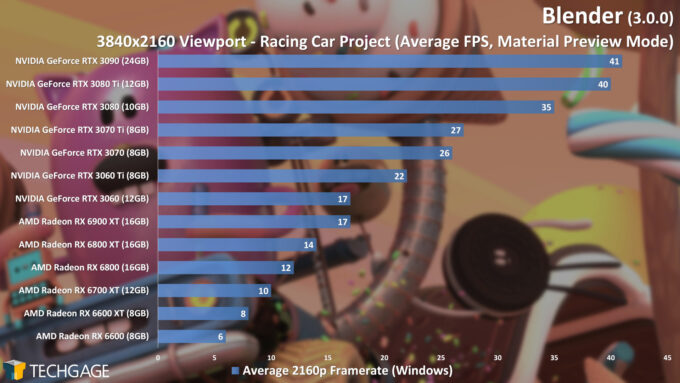 For simpler projects like the Controller one used here, any one of these listed GPUs is going to deliver good enough performance for working with, but naturally, your camera panning will become much smoother with a higher-end GPU. The Racing Car project is the more complex of the two, which is made evident with the results being at least a third of those that we saw with the Controller project. If you’re working with really complex projects in Material Preview mode, you’ll definitely want a higher-end GPU.

Overall, there’s quite a large performance delta seen between the bottom and top GPUs in both results here, making it a great benchmark. 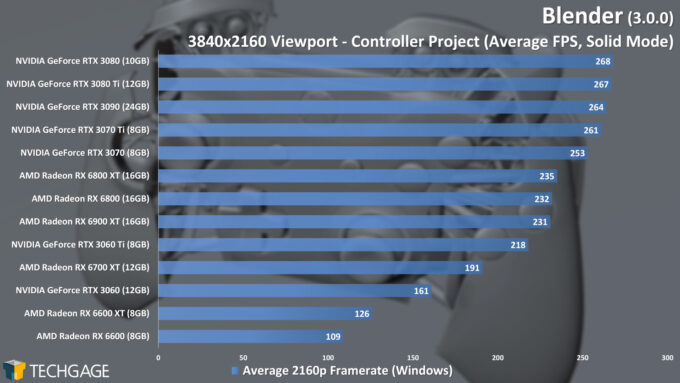 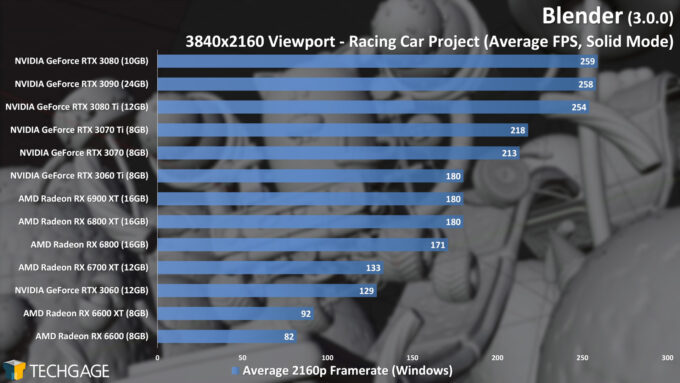 Even with the Solid mode being a lot easier on the GPU than the Material Preview mode, there’s still a large difference seen across the stack, but every single one of our tested GPUs can deliver great performance here. If you like smoothness, and have a high refresh monitor, the fastest GPUs here will take good advantage of it. Still, the faster your GPU, the more you will be able to take better advantage of your high-refresh monitor:

Eevee is only going to make use of one of graphic card. The reason is that multiple graphic cards CANNOT work together to render a single frame using rasterization which is what Eevee uses , so it will perform best when it benefits from high VRAM capacity. If EEVEE is your primary application, then we recommend using NVIDIA Geforce graphics cards as they generally have higher performance at a lower cost. 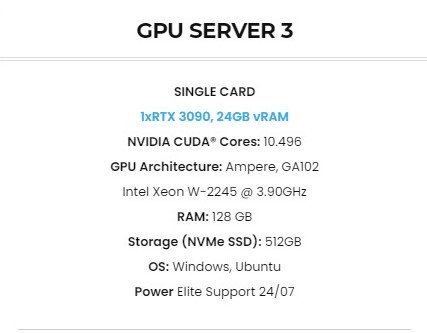 Based on previous analysis, iRender provides server 3 owning Xeon W-2245 CPU Processor with a high clock speed of 3.9 GHz- 4.7GHz and 512 GB SSD to specifically support the software only make use of a single card. This server comes with the latest RTX 3090 card from NVIDIA with the VRAM capacity up to 24GB.

You can start at 3.8 USD to use the beast RTX 3090. You can rest assured that our pricing schemes are the cheapest you have ever found, with rates three times lower than that of other solutions. Besides our hard-to-beat prices, we also offer generous volume discounts, which provide you with credit bonuses depending on how much you top up. Moreover, you can always save up to 20% with our daily/weekly rental.

For further queries, please feel free to contact Ms. Jenny: [email protected]. Now go forth and create! Become a member of the iRender community today to stop wasting pointless hours of rendering. We do the rendering, the creativity is yours!