Unreal Engine and Unity are two of the main players in the game-engine market. Side FX has ensured that there are direct links between these two engines and Houdini itself. The means by which the link is made possible is through ‘Houdini Digital Assets’, created directly within Houdini and then imported into Unreal and Unity. Houdini ensures a ‘live’ link between these assets and Houdini to ensure that any amends made to the assets are reflected not only in Houdini but also in Unreal Engine and Unity. This plugin allows for seamless integration between Houdini and two of the biggest game engines out there.

In today’s article, let’s together get an overview of how Houdini and Unreal Engine integrate into each other’s workflow.

SideFX is pleased to announce that Houdini Engine for UE4 are now available for commercial customers for free. Previously free for artists using Houdini Indie, this now gives commercial artists and studios the ability to widely deploy procedural assets created in Houdini to the UE4 real-time 3D platforms for use in game and XR development, virtual production and design visualizations.

Through the power of Houdini Engine, procedural tools and assets built in Houdini with custom-tailored interfaces can be brought into UE4, and used by game artists whether they know Houdini or not. Houdini Engine does the processing work on the assets, and delivers the results back to the editor. These procedural assets work within the editor for content creation and are baked out before going to runtime.

The Houdini Engine plug-ins have been used on numerous shipped games – just a few examples include King’s Candy Crush, eXiin’s Ary and the Secret of Seasons, and Fishing Cactus’s Nanotale – Typing Chronicles.

Within a studio environment, a smaller tech team using interactive Houdini Core or Houdini FX would create digital assets to meet the needs of a project. These assets would be designed to allow for customization while ensuring that they output clean geometry with collisions and optimizations such as instancing. These interactive licenses are paid licenses.

Meanwhile the rest of the studio uses the FREE Houdini Engine for Unreal/Unity licenses to consume those assets. The assets become a part of the project files and level designers are able to manipulate these assets freely. If an asset needs new functionality then the tech team would make an update and the changes would propagate throughout the project since the assets are always being referenced into the host applications. 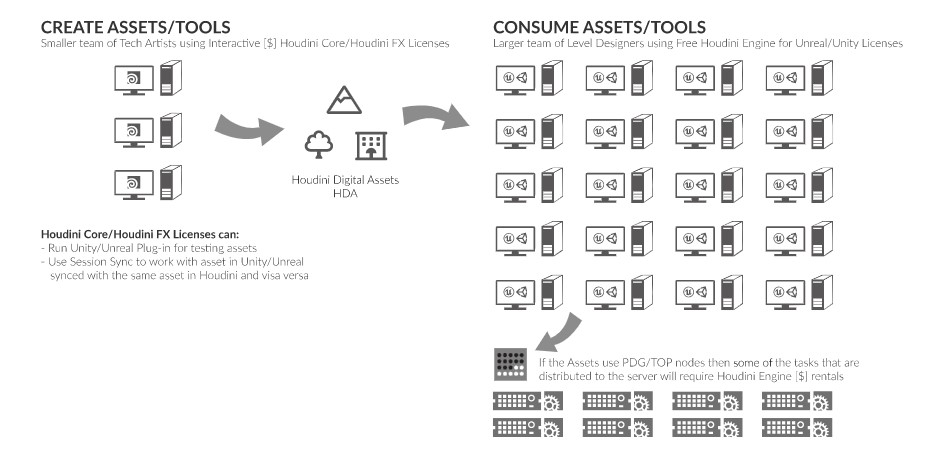 The installer extracts the Unreal plug-in for all supported Unreal versions. This includes the pre-built plug-in binary, source files and resource files. The extracted files can be found under the Houdini Install folder.

Note: Version 1 of the plugin has been deprecated, only Version 2 is now available.

Unreal will automatically load HoudiniEngine next time it is started. If another version of Unreal is installed later, it will not have the plug-in automatically. The plug-in can be installed by running the installer again.

Fastest way to get the plug-in working inside Unreal:

Note: Houdini18.5 does not ship with Version2 Binaries for MacOS for now. Currently, you will have to build the plugin from the source code available on the github repository.

Fastest way to get the plug-in working inside Unreal:

Open the door to powerful procedural workflows with Houdini Engine for UE4. Houdini’s node-based workflow makes it easy to publish networks of nodes as shareable Houdini Digital Assets. With the Houdini Engine, these assets can be loaded into the Unreal Editor with procedural controls available to artists. We hope that these tips will absolutely decrease the time it takes for you to create incredible Houdini simulations.