Maxon Redshift integrates perfectly with many industry leading 3D design applications making it an ideal choice for architects, product designers and animators to bring their projects to life. One of the main benefits of GPU rendering over CPU rendering is the potential for incredible render times. To achieve the best render times possible, it requires the right computing hardware. So how do you optimize a workstation to get the most from Redshift?  The video card selection is the driving factor for performance in Redshift, basically, you can use multiple GPUs to further speed up. 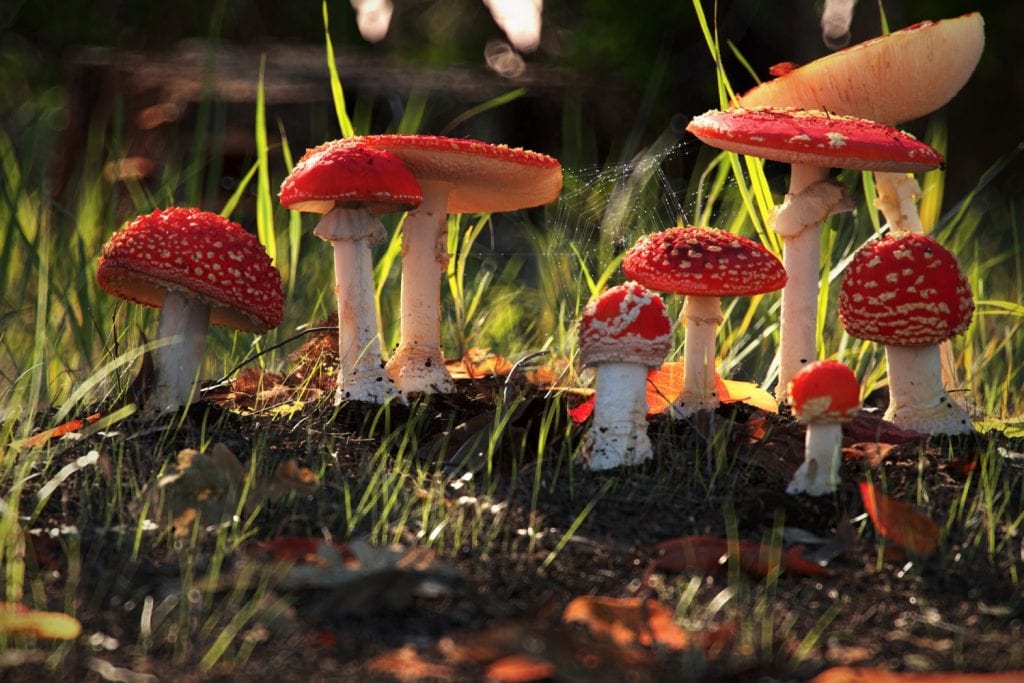 Speaking of multiple cards, how well does rendering speed scale across multiple GPUs in Redshift & Cinema 4D? Are there diminishing returns as more cards are added? We are putting Redshift 3.0.50 to the test, looking at scaling from one to eight video cards in a single workstation.

We have the beast RTX 3090 – based on the Ampere architecture. We think it’s fair to call this card a “beast”, not only because it will prove to be the fastest gaming and creator GPU on the market, but also because it will take up three PCI slots in your PC. To see how increasing the number of video cards in a system affects performance in Redshift with the new GeForce 30 Series (Ampere architecture), we will compare the render time in Redshift & Cinema 4D from one GPU RTX 3090 to eight GPUs RTX 3090. Particularly, our project size is 2560p x 1080p at 128 samples. The number of frames is only five (just for the purpose of testing).

For our test platform, we wanted to use a high clock speed processor so that the video cards could really shine. Because we do the test on multiple GPUs, we also needed a platform that would support as many video cards as possible in a large tower workstation. Given that combination of goals, the configurations which made the most sense were Intel’s Xeon W-2245 processor on a Gigabyte MW51-HP0 board, and AMD Ryzen Threadripper Pro 3955WX. That provided the right PCI-Express slot layout for up to eight GPUs, and the clock speed runs fast: 4.3GHz base and up to 4.7GHz turbo.

Redshift supports a maximum of 8 GPUs per session and it is very good at utilizing multiple GPUs simultaneously, so installing many graphics cards into your system is a great way to boost performance further. When doing so, sufficiently cooling your system becomes very important. NVIDIA GeForce RTX cards expel the heat directly out the back of the system, known as blower cards, are the best choice for this. They stack nicely and work very comfortably in multi GPU Workstations. Professional NVIDIA Graphics cards or new NVIDIA GeForce RTX are all designed with this cooler. 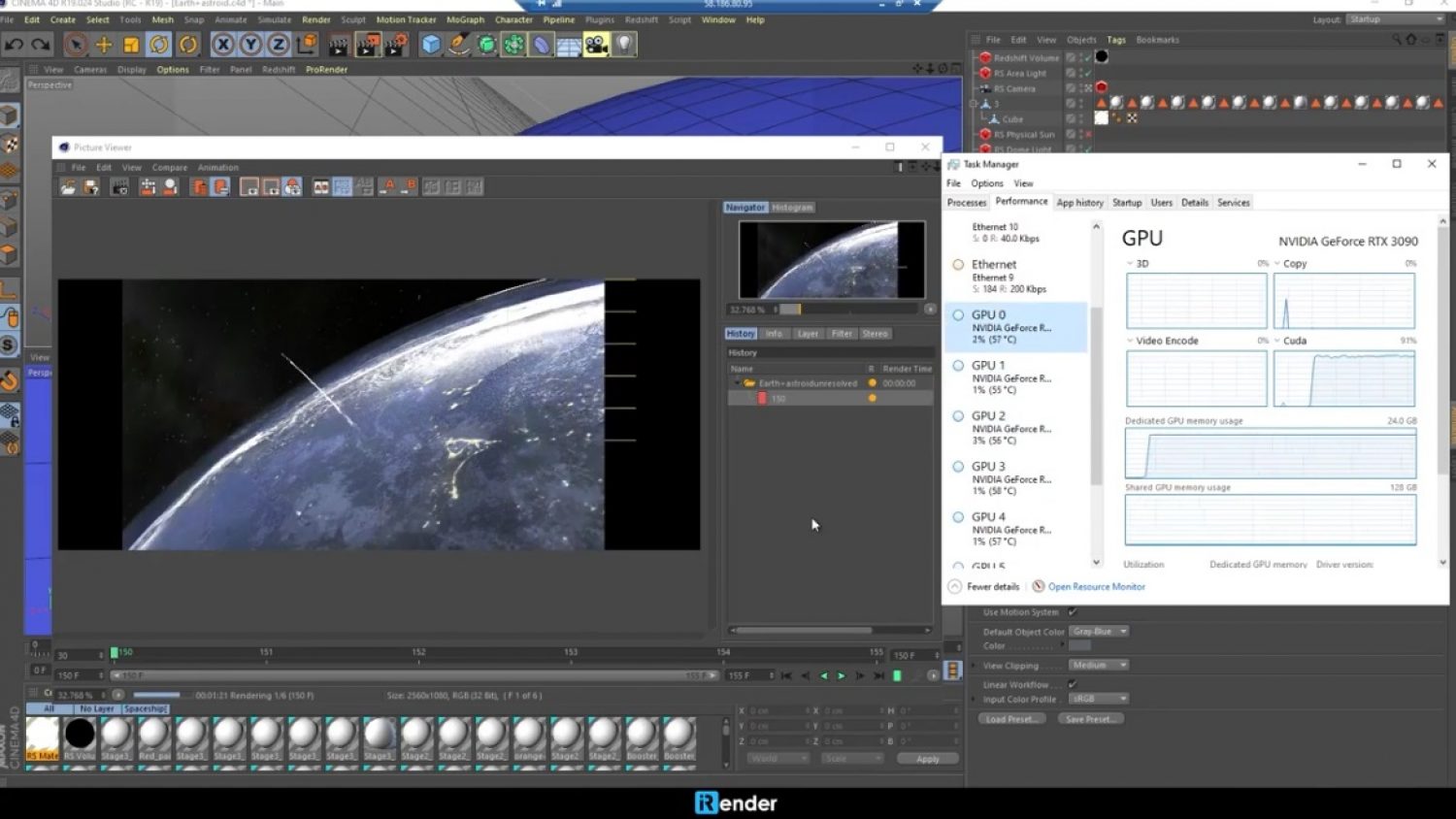 According to the iRender test with RTX 3090, we get a pretty scaling from 1 to 2 to 4 GPU, the performance rise is 199%, 284%, 374% respectively. In particular, single RTX 3090 takes 36m38s to render five frames from frame 150 to frame 155. This may be an acceptable number for a local computer, but in this test we want to analyze more about the performance. As demonstrated above, it is undeniable that our workstation needs at least 2 GPU if you are using this GPU-accelerated engine, therefore, we continued to test our server 4A and 5P then we got amazing results: dual RTX 3090 cut render time in half to 18m14s while with six GPUs it took only 10m16s minutes.

Since the 6th and 8th cards were added, render times no longer scale linearly but are still impressive numbers for large projects that have a tight deadline. (respectively 7m14s and 6m30s). It isn’t quite perfect – there is some level of diminishing returns – but it is still more than enough to justify their use in multi-GPU workstations. You can also do your test by signing up for an account here! 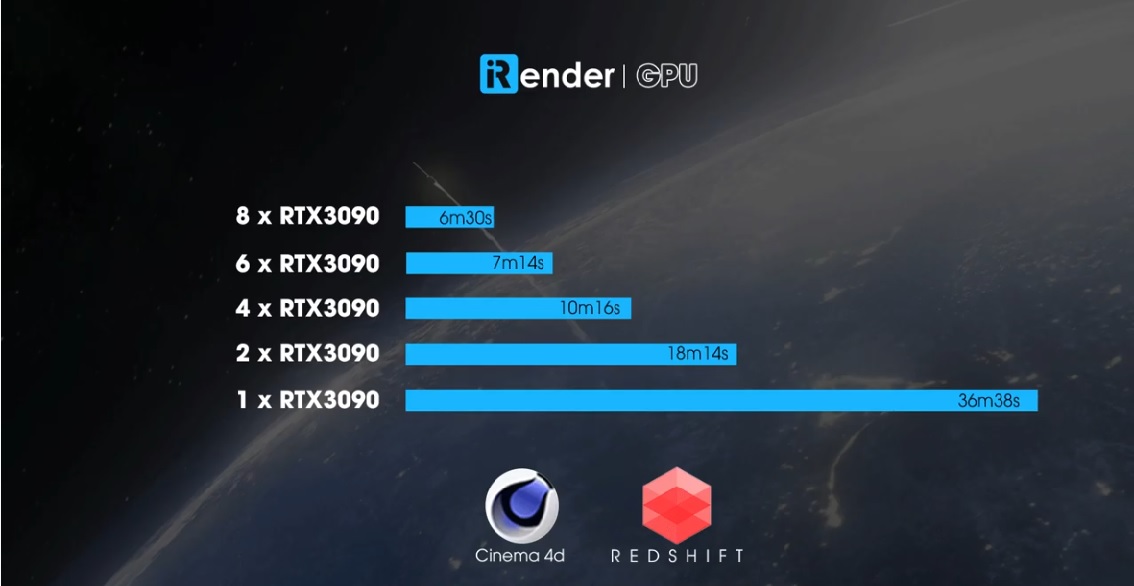 As long as each card is supported, Redshift does allow you to mix and match different models of video cards. However, the more different the cards (different architectures, different versions of CUDA, etc.), the larger the chance of errors occurring. Also note that if the cards have different amounts of VRAM you will be limited to the smallest amount.

For example: If you combine an 11 GB RTX 2080Ti with a 24 GB RTX 3090 for rendering, the rendering speed increases, but the memory size available for the rendering is effectively 11 GB. If you place an emphasis on having large texture maps and very complex scenes, it’s safer to use a card with a large amount of VRAM and ensure that VRAM size is consistent throughout all the GPUs you intend to use for rendering. 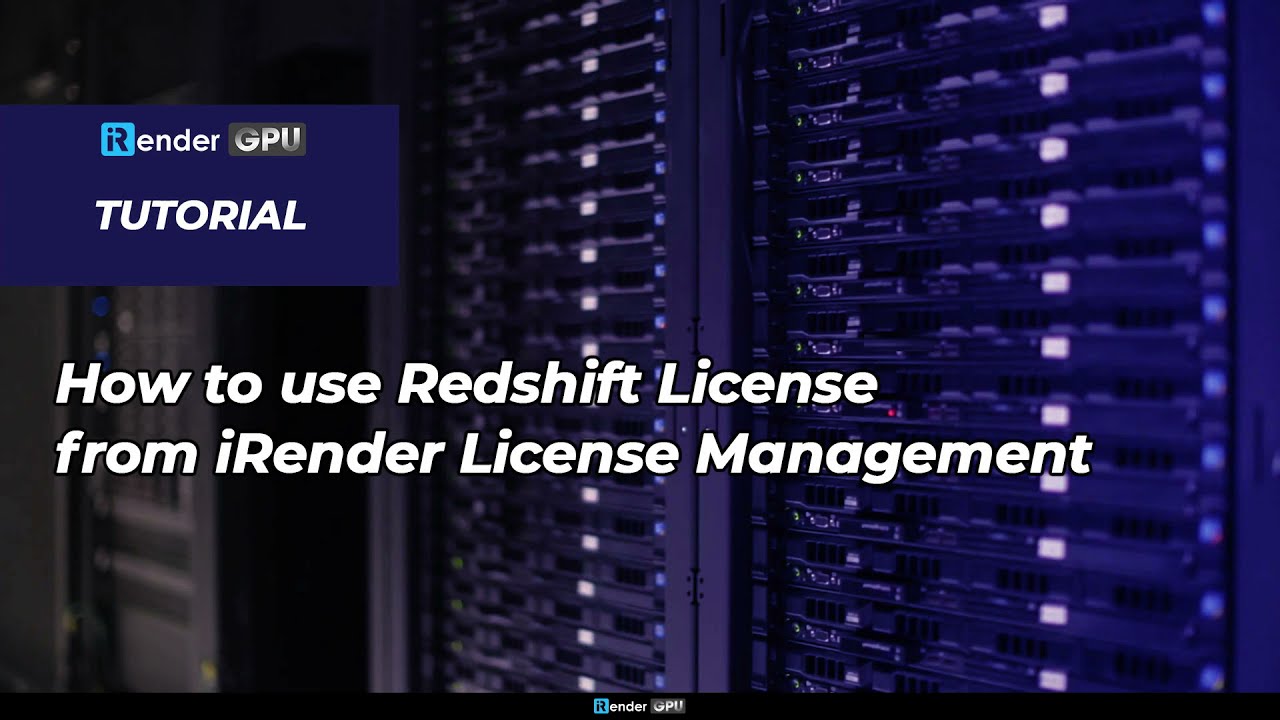 How to use Redshift License of iRender

Additionally, the cost for the Redshift License is $500. For maximum support to deliver the smoothest rendering experience possible with Redshift on our servers, iRender offers PRIME customers free Redshift floating licenses. Users who top up enough points to become Prime customers will be able to use the Redshift license without usage or maintenance costs. If new hardware is not in your budget right now, join iRender and cut your render times in half with just some minor time investment from 3.8$. We do the rendering, the creativity is yours!