Redshift for Houdini supports real-time interactive rendering within the MPlay application. This window can show a real-time preview of the current scene. It updates the scene in real-time after you make a specific change to your scenes such as transforming objects, lights, or cameras, or while working with the Redshift shaders.

The IPR (Redshift Interactive Preview Renderer) can be enabled from any Redshift ROP node or by choosing the IPR icon on the plugin shelf. There are some IPR configuration parameters in the ROP node. You can use the same IPR icon to reload the scene if it has not been automatically updated, for instance, after adding or removing objects or lights to the scene. Other tools that are available for the IPR are the On/Off command and the Snapshot command. The On/Off command enables/disables the IPR update functions. And the Snapshot command takes a snapshot of the current render in MPlay.

Real-time preview of the enabled AOVs is feasible after disabling progressive rendering in the ROP node’s IPR settings tab. You may set the MPlay to always be on top. You only need to add the “-T” option to the Command Line Options in the MPlay Windows > Profile window. 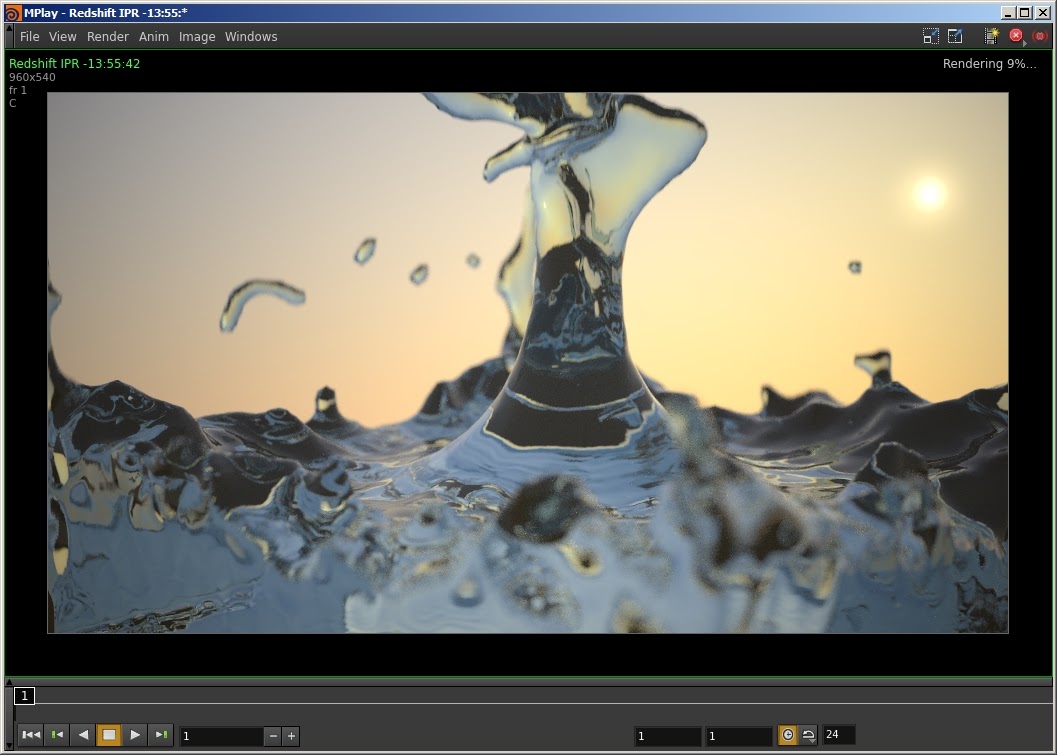 The Redshift plugin for Houdini supports the IPR interactive rendering inside the HoudiniRender View panel as well as in the viewports using the Region Render Tool. To make it possible, you must add an additional ROP to the scene. The shelf “Add RS ROP” tool adds the Redshift IPR ROP node automatically. However, the node is also available on the ROPs Render tab.

The Redshift_IPR ROP node contains an optional parameter called “Linked ROP”. You can use this parameter to set the Redshift_ROP node to be used by the IPR session. If you are working in a scene with only one RS ROP node, you can leave it empty to use the default Redshift ROP node. 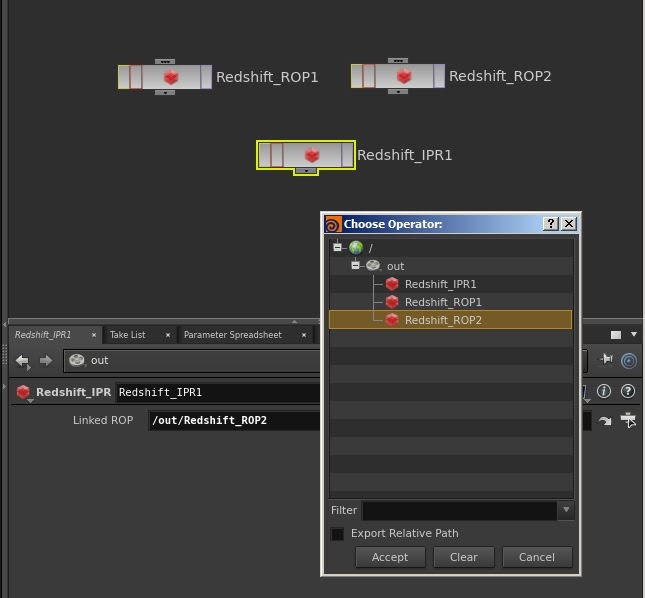 The Render View IPR supports the camera selector and render region features without requiring a full reload of the scene after each interaction. 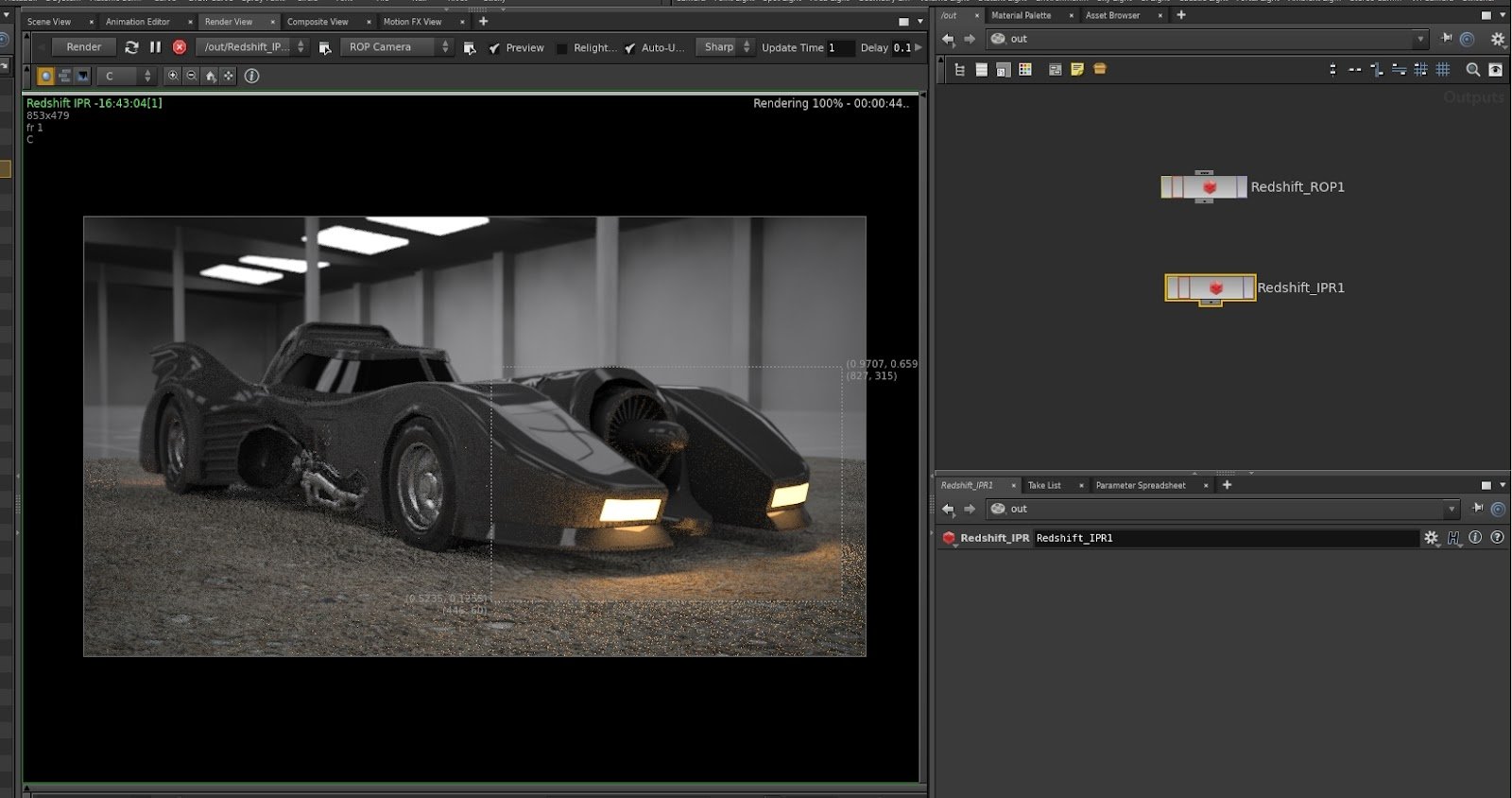 Using the region render tool, you can enable the Redshift IPR across Houdini viewports in the same way that Mantra or other render engines do.

Also, you can preview in the Render View panel or in the render region the enabled sceneAOVs. As in the MPlay IPR, the AOVs are sent to the IPR if the “IPR progressive rendering” is disabled and the “Render AOVs to IPR MPlay” is enabled in the main ROP node.

Please keep in mind that if you have the MPlay IPR running, you must close it before using the Render View panel or the region render tool.

We provide high-configuration machines that are specifically configured and optimized for GPU rendering. Using our service, you have complete control and flexibility over the machines you operate. Therefore, you can customize your creative workstation as you wish. With a range of GPU machines from a single RTX 3090 to multiple 2/4/6/8x RTX 3090, you can choose one that meets your need to start the rendering process. Furthermore, we allow you to upgrade or downgrade your workstation without having to reinstall anything. You can even run multiple machines concomitantly to speed up the renders.

Redshift is a fully GPU-based renderer. This means that the graphic cards (or GPUs) in your system are what impact how long the renders take to finish. Also, Redshift scales very well with multiple GPUs and can significantly improve your render times. Thus, the more powerful the GPU, the better, the more GPUs the faster the render will be.

At iRender, we have both powerful GPU and multiple GPU machines that definitely speed up Redshift rendering. Our multiple GPU machines are designed with 2/4/6/8x RTX 3090. Also, all of them have a strong AMD Ryzen Threadripper Pro 3955WX processor, allowing you to extract mesh data, load textures, and prepare scene data more quickly. Moreover, the workstations are ideal with 256GB RAM capacity and SSD NVMe 2T storage space. We highly recommend you try the highest configuration server, the 8x RTX 3090. This server will be a super-configured one that brings crazy speed to Redshift in Houdini. It is rated as one of the most worth-trying machines so far for Redshift.

All of our machine configurations are publicly posted on our website. Visit HERE for more details about the configuration and the cost.

Let’s check out the rendering performance in Houdini with Redshift renderer on our 4/6/8x RTX 3090 machines in the 03 following test videos.

This month, we are running a SPECIAL OFFER: 20% Additional Bonus for new clients who register an account and make a top-up within 24 hours after registration.

Get the FREE COUPON to try our high-end machines for your Houdini and Redshift projects now! For more information, please do not hesitate to reach us at [email protected] or Whatsapp: +84915875500.