Solaris is a suite of look development, layout and lighting tools that enables artists to create USD-based scene graphs that go from asset creation to final render in Houdini. It  integrates with USD’s HYDRA Imaging Framework for access to a wide range of render engines such as the new SideFX Karma, Pixar RenderMan, Autodesk Arnold, Maxon Redshift, AMD ProRender and more.

Released as part of Houdini 18 later in 2019, Solaris will be available in every edition of Houdini. 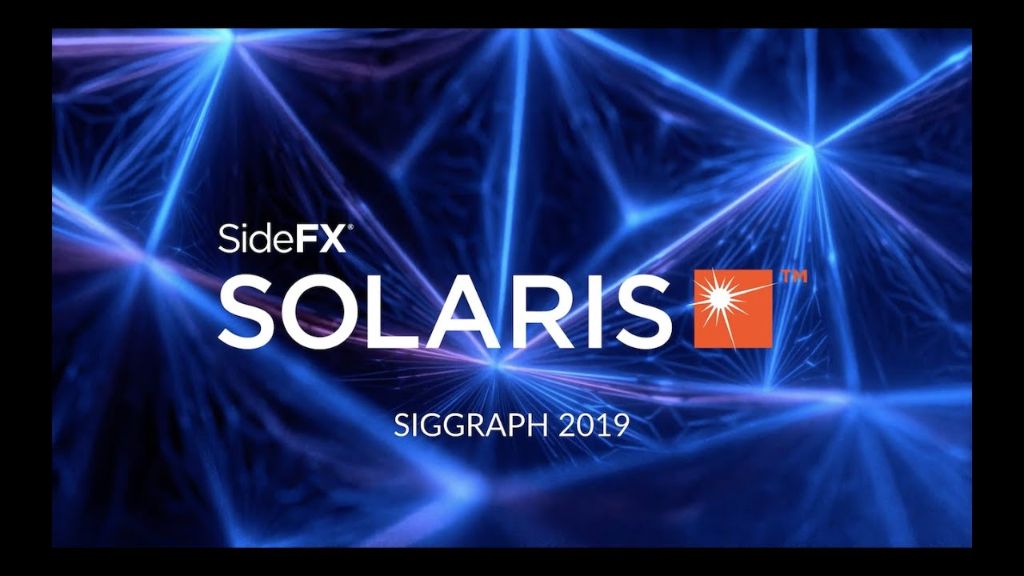 Solaris continues SideFX’s recent efforts to make the existing functionality in Houdini accessible to people outside the software’s original core user base of TDs and technical artists.

Now with Solaris, you can access and control through a new series of GUIs and direct drag-and-drop workflows, rather than by wiring nodes and setting parameter values. This is “a whole new world where everything happens in one place”, said Keating, senior product designer of Houdini. 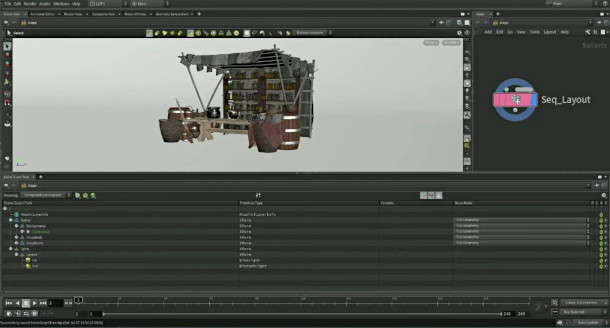 Solaris is based on USD, Pixar’s open-source Universal Scene Description, which is rapidly becoming a standard for the exchange of scene data between visual effects tools. It doesn’t only mean it imports USD, but also means it works directly with USD.

The Scene Graph Tree, a new custom UI, displays the structure of the USD file being edited – the meshes, transforms, lights and cameras – while debugging tools display the corresponding code.

Besides that, Solaris’s new set of LOP (Lighting OPerator) nodes modify USD data directly, while the result of the changes can be previewed interactively in the viewport via Karma, a new USD-compatible render engine.

Being based on USD gives Solaris a number of advantages in production workflows:

Firstly, assets are pulled from disk on demand. It will avoid unnecessary processing overheads, and entire layers can be toggled on or off within the USD file to help keep large scenes interactive.

Secondly, the format is layer-based and also means that workflow is non-destructive. It helps FX artists work within one USD layer and a layout artist in another, so avoiding making competing edits to a scene.

During scene assembly, the layers for every department in the production pipeline are brought together, and the final USD file is composed. 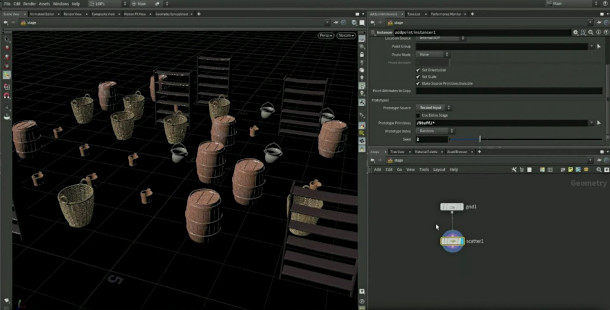 During look development, USD layers also empower artists to set up variations for an asset: for example, to create material variants or LOD versions.

There are two useful nodes. First one is the new Vary Material Assignment node to help apply variations to instances of an asset, with options to set the frequency with which each variant appears, or to offset it from surrounding instances.

The second node is Point Instancer, which can control the spatial distribution of the instances. It also has an internal SOP network that determines how the points are scattered across a scene.

As well as instancing assets, it is possible to pull individual objects from an asset library and distribute them in the same way.

The resulting workflow gets rid of the difference between conventional look dev and shot layout, making it possible to work on both the shading of an asset and its distribution in a scene.

Solaris provides layout artists with a new Stage Manager. It is a simpler way to construct a USD scene graph than by manipulating nodes and layers.

Now users can place assets in a scene using Stage Manager, an “almost modeling-style tools”, dragging and dropping to place, transform or scale them, or snap them to surrounding surfaces.

SideFX is also working on a set of tools that is artist-friendly for typical layout tasks. It promises to take advantage of Houdini’s physics systems. 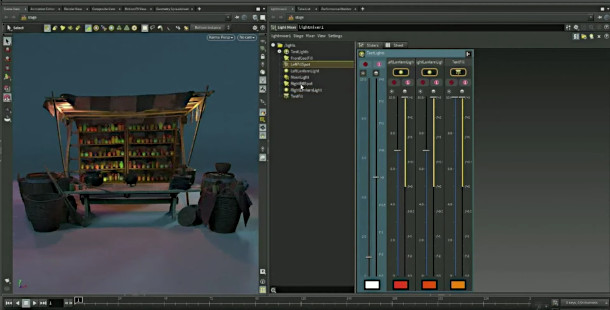 Lights can be placed in a scene in a similar way, with lighting artists also getting a Light Mixer.

Besides, the new LOP node comes with an accompanying GUI resembling a real-world light mixing board, with a series of vertical sliders to adjust the intensity or colour of individual lights.

Artists can group lights into collections with their own master sliders.

Moreover, there is also a new GUI for linking lights; and lighting set-ups can be displayed in a tabular ‘sheet view’, which provides a global overview of the key settings.

Solaris’s USD-based approach also enables artists to edit scenes on a per-shot or per-sequence level: for example, to set up time-of-day variations in lighting between shots.

A new Context Options Editor acts as a centralised control system for all of the necessary network overrides and switches, making it possible to toggle instantly between shots and sequences, and minimising the chances of mistakes when the time comes to render a particular shot.

iRender provides you a high-performance and configurable server system for 3D rendering, AI Training, VR & AR, simulation, etc. We believe that design and creative activities are private and personal that only you artists will know what you want with your animation. That’s the reason why we provide remote servers so that you can install Houdini and work with it like you do on your local machine.

And, you can work with Solaris on our machine, and render with any render engines, like Redshift, Octane, V-Ray, Arnold. For Redshift, V-Ray and Octane, we suggest our dual RTX3090s, 4 x RTX3090s, 6 x RTX3090 and 8 x RTX3090. For Arnold rendering, you can choose between single RTX3090 or CPU rendering (if your Arnold version is below 5.3, which doesn’t support GPU rendering).

Let’s see some of Houdini benchmark with Redshift, V-ray and Octane on our package RTX3090s: